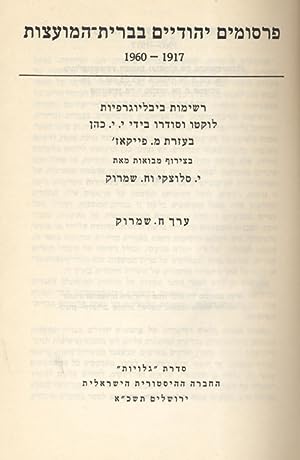 Publishers cloth. 8vo. 143, 502, VI pages. 22 cm. First edition. In Hebrew and Yiddish with introduction and table of contents also in English. Title page verso: Yidishe publik? Atsyes in Rat? N-Farband, 1917-1960; Jewish publications in the Soviet Union, 1917-1960. Compiled and arranged by Y. Y. Cohen; with the assistance of M. Piekarz; introductions by Y. Slutski and Kh. Shmeruk; edited by Kh. Shmeruk. Annotated bibliography consisting of 4, 152 entries. The editor, Chone Schmeruk (1921 1997) , was a "historian of Yiddish literature and Ashkenazic Jewry. Khone Shmeruk was born and raised in Warsaw, where he studied in a modern heder and in the Krinski secondary school before beginning studies at the University of Warsaw and the YIVO Institute. In the latter part of his career, he was instrumental in renewing Jewish studies in Poland. From 1939 to 1946, Shmeruk was a refugee in the USSR. He went from there to a displaced persons camp in Stuttgart, and in 1949 immigrated to Israel. He studied in the Yiddish department at the Hebrew University in Jerusalem under Dov Sadan and in the department of Jewish history with Ben-Zion Dinur, Yits? Ak Baer, and Israel Halpern, who directed Shmeruk s dissertation on Jewish settlement in Belorussia from 1918 to 1932, for which he earned a doctorate in 1961. For many years Shmeruk was head of the Department of Yiddish at the Hebrew University in Jerusalem, and in that framework he founded a belles lettres series in 1969 (titled Sifrut Yidish [Yiddish Literature]) and a series of monographs in 1986 (Yidish Mekorot u-me? Karim [Yiddish Texts and Studies]) . He laid the foundations for the Yiddish Press catalog (Index of Yiddish Periodicals; IYP) , and for other collections and recordings, including a bibliography of Yiddish books printed between 1534 and 1750. He also initiated and established the Center for Research and Documentation of East European Jewry (1956) and the Center for Research on the History and Culture of Polish Jews at the Hebrew University (1983) , directing the latter for nine years and forming a model for a similar center, established at the Jagiellonian University in Kraków in 1986. In addition, Shmeruk served as a visiting professor at the University of Warsaw and taught at the University of Lódz. " (YIVO Encyclopedia) Continued by Russian publications on Jews and Judaism in the Soviet Union, 1917-1967: a bibliography . Subjects: Hebrew imprints - Soviet Union - Bibliography. Yiddish imprints - Soviet Union - Bibliography. Jewish publishing - Soviet Union - Bibliography. Jews - Soviet Union - Bibliography. Light soiling to cloth and outer edges, internally very fresh and clean. Good + condition. (EE-5-42) Ee2, rus6, bibliog4. (ja). Bestandsnummer des Verkäufers 32348

Dan Wyman Books is the largest Jewish Antiquarian bookstore in New York, and a leading dealer worldwide. Please stop by when you are in town. Open by appointment most days, but closed on Jewish Holidays. Please visit our homepage at www.DanWymanBooks.com Please contact us with your needs or if you have books to sell. We consistently out-bid our competitors and we make housecalls to buy books!


Receive free of charge our monthly book list of unusual out-of-print Jewish,
titles in your e-mail box--days before they are posted on line. E-mail us for
details (no purchase necessary).

All titles are 100% returnable for any reason. U.S. Shipping is free. We accept
payment by check or major credit card (MC/VISA, AMEX, Discover), PayPal or Cash.
Please call or e-mail to hold an item. We reciprocate standard trade terms.


Shipping costs are based on books weighing 2.2 LB, or 1 KG. If your book order is heavy or oversized, we may contact you to let you know extra shipping is required.