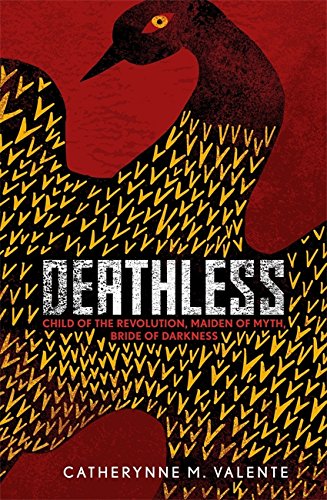 Romantic and blood-streaked, and infused with magic so real you can feel it on your fingertips - Deathless is beautiful. (Cory Doctorow)

Valente's invention and ambition are extraordinary. (The Times)

Swept away to the icy wastes of the Russian steppes and the frigid streets of Stalinist St Petersburg
I felt I'd happened upon a forgotten classic. A spine-tingling mix of magic and darkness, it echoes both
The Master and Margarita and Angela Carter's The Company of Wolves. The prose is perfect,
the imagery - houses made of living skin, birds that turn into husbands and, oh, so much blood - is
spectacular and the story totally absorbing. This book is not just good, it is genuinely extraordinary.

Writers such as Brockmeier, Mieville and Valente are returning to fantasy for the many ways it can unlock the truth. Perhaps it is a consequence of living in an era of such radical change, but the fantasic seems once again to play a part in expressing the truth of our time. (Guardian)

Stories, unlike people . . . can live again . . . They must be revived by the miraculous touch of a very rare class of being, a kind of multi-classed genius/scholar/saint, who can restore them to life. Catherynne Valente is such a being. (Lev Grossman)

Child of the revolution, maiden of myth, bride of darkness

A handsome young man arrives in St Petersburg at the house of Marya Morevna. He is Koschei, the Tsar of Life, and he is Marya's fate.

Koschei leads Marya to his kingdom, where she becomes a warrior in his tireless battle against his own brother, the Tsar of Death.

Years pass. Battle-hardened, scarred by love, and longing for respite, Marya returns to St Petersburg - only to discover a place as pitiful as the land she has just fled: a starveling city, haunted by death.

Deathless is a fierce story of life and death, love and power, old memories, deep myth and dark magic, set against the history of Russia in the twentieth century. It is, quite simply, unforgettable.