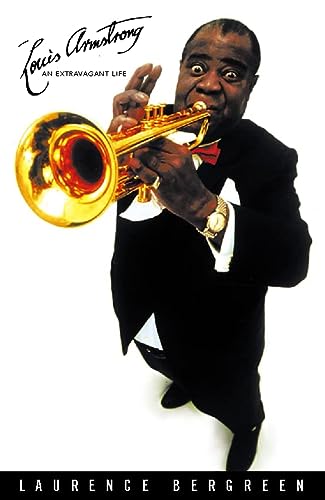 Perhaps America's greatest musical performer, Louis Armstrong was a character of epic proportions - married four times, with countless romantic involvements in and around his marriages, a life-long advocate of marijuana, who took his music from the streets of New Orleans to Hollywood, Europe, South America and, through his many recordings, the world. Armstrong was born to the 16-year-old daughter of a slave, who took to prostitution to support herself and her child. He spent time in reform school (where he first learned to play the bugle) and for a while earned his living as a pimp before starting to play jazz in the red-light district of New Orleans. He fought against prejudice, the Depression and the gangster-run music business of Chicago to become one of the most prominent and celebrated black men of his generation (he was the first black man to have his own radio show) and one of the most successful and popular jazz musicians of all time. The author had access to an archive of Armstrong's writing, recordings and photographs including 1800 hours of tape-recorded reminiscenes and anecdotes; 82 personal scrapbooks, 5000 candid photographs taken by Armstrong; 300 pages of unpublished autobiographical typescript; letters and other personal papers.

Despite the way he has permeated our music and our culture, it has not been possible to tell the full story of Louis Armstrong's life until now. An extraordinary new archive of his writings, recordings and correspondence has only recently become available for the first time. 'Louis Armstrong: An Extravagant Life' is the result of Laurence Bergreen's journey through these biographical riches.

America's greatest musical performer was born on 4 August 1901 to the fifteen-year-old daughter of a slave. Louis Armstrong, Satchmo, as he would become known to his fans worldwide, grew up on the streets of New Orleans, spending time in reform school and as a pimp before starting to play the cornet in the city's bordellos and nightclubs.

Armstrong's talents as a musician, composer and singer were dazzling and groundbreaking. Through his records, his tours of America and Europe, his radio show – the first ever to be hosted by a black man – and films, he took jazz from its roots in New Orleans to the world and helped to create the Jazz Age. Yet despite his phenomenal rise to international fame, his career was marked by struggle – against the Depression, the Chicago gangsters of the thirties and most of all against racial prejudice.

Louis Armstrong was a character of epic proportions: married four times, with countless romantic involvements in and around his marriages, a life-long believer in marijuana and an accomplished storyteller and correspondent. As a very young man he turned to his typewriter and later his tape recorder to chronicle his life experiences, and his hard times, leaving an extraordinary archive that until now has remained unexplored. These intimate personal records, which include unexpurgated memoirs, personal scrapbooks, letters, several unpublished typescripts and dozens of exclusive interviews with key figures in Armstrong's life, reveal in vivid detail a man of passions and political belief, courage, humour and genius.

Laurence Bergreen is the author of the highly acclaimed biographies 'Capone: The Man and his Era'; 'As Thousands Cheer: The Life of Irving Berlin' and 'James Agee: A Life', as well as 'Look now, Pay Later: The Rise of the Network Broadcasting'.