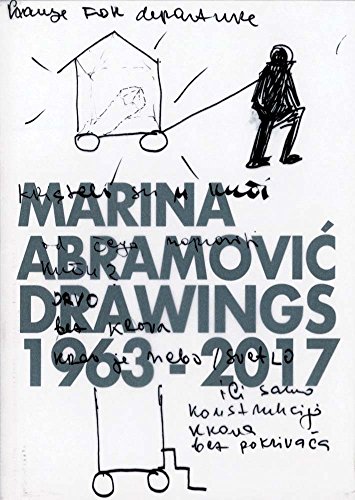 The performances of Marina Abramovic (born 1946) have pushed the boundaries of self-discovery for both artist and audience, marking radical engagements with time, stillness, energy and pain--from Rhythm 0 (1974), in which the artist offered herself up as an object of violent experimentation for the audience, to The Artist Is Present (2010), a performance with a three-month duration.

These groundbreaking performances often began their life as drawings and notes, an aspect of the artist's work that has previously been overlooked. Marina Abramovic: Drawings 1963-2017 presents more than 50 years of drawings, sketches, thoughts, dreams and ideas produced in the artist's hand, offering intimate insights into Abramovic's methods, processes and ideas.

Marina Abramovic has pioneered performance as a visual art form. She created some of the most important early works in this practice, including Rhythm 0 (1974), in which she offered herself as an object of experimentation for the audience, as well as Rhythm 5 (1974), where she lay in the centre of a burning five-point star to the point of losing consciousness. These performances married concept with physicality, endurance with empathy, complicity with loss of control, passivity with danger. They pushed the boundaries of self-discovery, both of herself and her audience. They also marked her first engagements with time, stillness, energy, pain, and the resulting heightened consciousness generated by long durational performance. The catalogue provides a unique insight into the artist's working method and reflections. It is devoted to more than 50 years of drawings, sketches, thoughts, dreams and ideas produced in Abramovic's hand, and demonstrates the artist's methodological approach. The book thus provides valuable insight into the processes that provide further background knowledge on her performance and communal works.