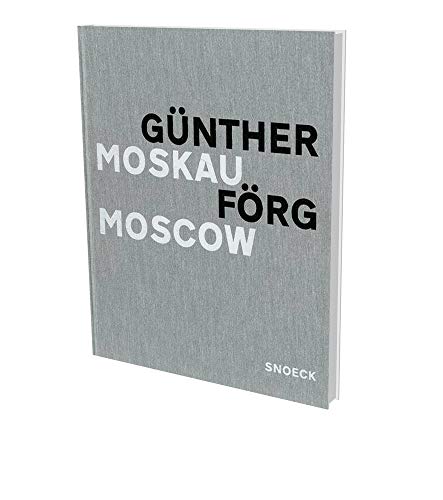 While in Moscow in 1995, Günther Förg shot images of 50 examples of Modernist architecture, including Melnikov's studio, famous and oft copied for its ground plan based on a drum, and numerous Constructivist and avant-garde structures from the 1920s and early 1930s. Selected from 1,000 like photographs, from which Förg is currently assembling and printing his definitive Moscow archive. Signed and numbered in an edition of 1,000 copies.

In our regular conversations, Günther Förg (1952-2013) always inquired about how things were going at the publishing house. He commented warmly and his own brand of humour whenever he received a batch of new books, invariably coming up with suggestions for new titles, which he would then support most generously. In its relatively brief history, Snoeck has enjoyed a close, personal relationship with Günther Förg and his work over the past eleven years. The photobook »Moskau - Moscow« was not only our first joint project, it was the very first book in Snoeck's programme featured at Frankfurt book fair in 2002. This book, suggested by the firm, with its brittle but all the more expressive photographs of constructivist Muscovite architecture from the 1920s and 1930s, effectively formed the cornerstone of the company's subsequent programme. After a great deal of preparation and edited by Reiner Speck, Günther Förg's friends book »Laissez un Message« followed in the late autumn of 2005 to commemorate his fiftieth birthday which was celebrated on December 7, 2002. The rapid succession of publications is testament to Günther Förg's constant and indefatigable encircling of his projects, those highways and byways, with books: spring 2006 »Gazzetta dello Sport«, summer 2006--perhaps his most beautiful photobook in containing a cross-section of his entire photographic oeuvre--»Kunsthalle Bremen - Fotografie«, autumn 2006 »Watercolours«, spring 2007 »Passage« and finally, »Fields - Verges« in summer 2007. In the late autumn of 2007, Günther Förg inaugurated a completely new chapter in his work that would soon cover innumerable canvases and sheets with grids and random heaps and fields of looming dots, daubs and the inclusion of occasional paraphrases of older formal elements in what Max Wechsler describes as tachés. He presented them into two great volumes--the canvases in »Back and Forth« in summer 2008 followed by series of wax crayon drawings in »Aller / Retour« in spring 2009. The small-format »Trilogie der Tatzen« in conjunction with Günter Herburger in summer 2008 constituted a further attempt to combine literature and art following the collaboration with Arnold Stadler in 2006 on the »Watercolours« book. In spring 2013, as we were compiling and editing the small retrospective volume for »12 Lead Paintings« containing works dating back to 1989, he was busy making plans--undaunted and so endearingly enthusiastic as was his wont--for new series of works and, of course, new books. As recently as last autumn, I accompanied him to the »Piet Mondrian--Barnett Newman--Dan Flavin« show at the Kunstmuseum Basel. Günther Förg was always totally prepared; he had already got hold of the catalogue, which, it should be said, he was eager to jettison quickly because he didn't like it. We sped through the first room straight to Barnett Newman's works. We perused »The Name 1« from 1949 and »Chartres« from 1969 for an age; both works veritably knocked us sideways by virtue of their sheer presence - the first through its subtle blank sections in the thin red stripe in the middle against a stripy turquoise background, the second through its closed, rigidly sublime form, namely that of a new cathedral. Günther Förg died on December 5, 2013 on his sixty-first birthday. Our work reminds us daily that the bond we shared was quite extraordinary.