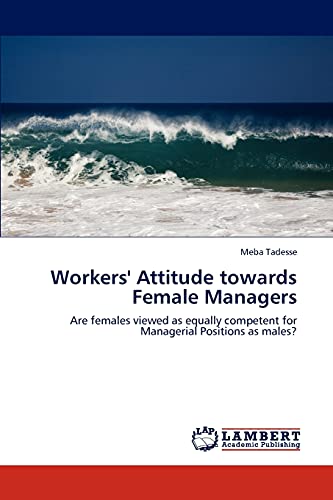 Stereotyping of females as less competitive and less capable is not unusual. As studies indicate, this is true for most countries, regardless of their economic development. Multinational researches on "attitude towards female managers" reported the universal existence of gender stereotypes. In Ethiopia, where the culture is mostly male dominating and hindering the potential of females, one can expect same results (unfavorable attitude), if not worse. But, one might also expect a changed attitude towards females in general, hence female mangers in particular, due to the widely declared policy of Females' Equality in terms of education, job opportunities, and managerial positions, in 1994. This book then provides the result of the assessment of workers' attitude towards female managers in Ethiopia.

Mrs. Meba had been teaching in two Universities, Jimma and Diredawa, since she graduated in Management in 2005. Holding her MBA in 2011 at Addis Ababa University (AAU), she is now working there at AAU, Lecturer, School of Business and Public Administration of the University and Assistant Directorate to the office of the President.