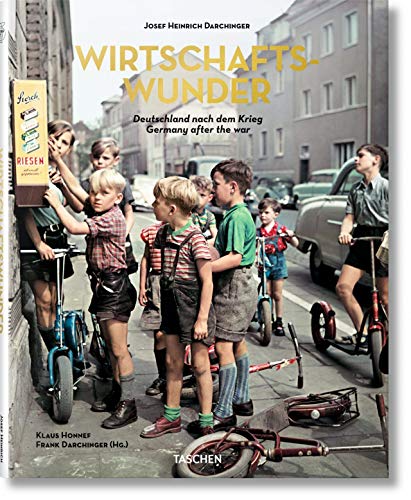 Críticas:
"A critic once said that Darchinger could think with his eyes. The photographs in the book Wirtschaftswunder prove that he can also feel and speak with them." -SPIEGEL.DE, Hamburg"
Reseńa del editor:
It was no more than eight years after the surrender of the Nazi government when Josef Heinrich Darchinger set out on his photographic journey through the West of a divided Germany. The bombs of World War II had reduced the country's major cities to deserts of rubble. Yet his pictures show scarcely any signs of the downfall of a civilization. Not that the photographer was manipulating the evidence: he simply recorded what he saw. At the time, a New York travel agency was advertising the last opportunity to go and visit the remaining bomb sites. Darchinger's pictures, in color and black-and-white, show a country in a fever of reconstruction. The economic boom was so incredible that the whole world spoke of an "economic miracle." The people who achieved it, in contrast, look down-to-earth, unassuming, conscientious, and diligent. And increasingly, they look like strangers in the world they have created. The photographs portray a country caught between the opposite poles of technological modernism and cultural restoration, between affluence and penury, between German Gemutlichkeit and the constant threat of the Cold War. They show the winners and losers of the "economic miracle," people from all social classes, at home, at work, in their very limited free time and as consumers. But they also show a country that looks, in retrospect, like a film from the middle of the last century. Of his color photographs, the Frankfurter Allgemeine Zeitung wrote, "they are exceptional contemporary documents indicating how swiftly the grayness of everyday life became infuse with color again."