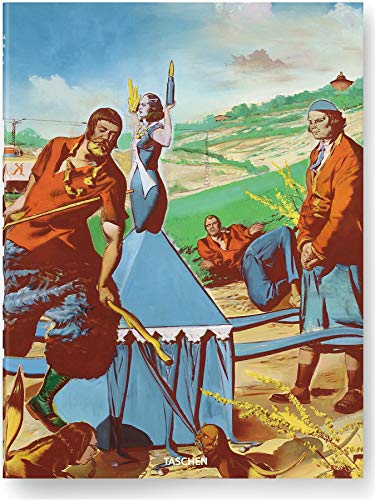 Human alter-reality. The essential overview of Neo Rauch's art. Bursting with radiant and unsettling juxtapositions, Neo Rauch's paintings are wormholes into worlds of startling psychological power and cultural collisions. His scenes involve the viewer in a history that is at once mythic, intimate, and present. Through a deep consideration of philosophy, art history, literature, and his own dreamscape, Rauch's paintings depict the precipices of progress and the struggles of communication. Electrified by their rich palettes, Rauch's fragmented landscapes and timeless characters dance between pop and baroque, social and psychological, graphic and painterly. Born in Leipzig in 1960, Rauch learned his trade behind the Iron Curtain. His influences and interests were shaped by personal hardship and the tumultuous changes of East Germany after the Wall fell. In the late 1980s, having finished his studies at the Academy of Visual Arts Leipzig under Arno Rink and Bernhard Heisig, he explored diverse approaches to painting in dialogue with works he encountered by Francis Bacon, the New Wild painters, and the pre-Renaissance painters he saw during his travels in Italy. By 1993, he had arrived at the unique style of intertwining figuration and abstraction that characterizes his oeuvre and has brought him international attention and respect. This monograph is the most inclusive collection of Rauch's work to date. It offers a generous range of his writings that illuminate the personal, symbolic, and formal complexities of world. Wolfgang Buscher's open and sensitive account of a walk through Rauch's neighborhood reveals the painter's compassion and modesty. Harald Kunde tracks Rauch's stylistic development through its main semantic threads and historical influences. Gary Tinterow draws from his work on Rauch's exhibition at the Metropolitan Museum to offer the reader a guide to the symbols that form the painter's extensive mythology. These essays complement Rauch's work with nuanced insights while allowing the images room to speak on their own. Within this atlas, readers will discover the rich density and enigmatic openness of Rauch's paintings. This is the unlimited edition based on the limited first edition.

Neo Rauch (*1960) graduated from the Leipzig Hochschule fur Grafik und Buchkunst (Academy of Visual Arts) as master student of Bernhard Heisig in 1990. In 1997 he won the art prize of the Leipziger Volkszeitung newspaper which lead to a first institutional exhibition at the Museum der bildenden Kunste in Leipzig. The breakthrough year was 2000 with a touring exhibition at Galerie fur Zeitgenossische Kunst in Leipzig, the Haus der Kunst in Munich, and at the Kunsthalle Zurich. Since then he has shown at a variety of venues including the Venice Biennale, a solo show at the Vienna Albertina, and the Metropolitan Museum in New York; in 2010 a major double retrospective simultaneously opened in Leipzig and Munich. Rauch lives and works in Leipzig. Wolfgang Buscher has written several books, among them the bestsellers Berlin - Moskau: Eine Reise zu Fu[beta] (2003), Asian Absences (2008), and Hartland (2011). Harald Kunde is director of the Museum Kurhaus Kleve, having previously been director of the Ludwig Forum for Internatioal Art in Aachen and the Kunsthaus Dresden. He has worked on numerous exhibitions and publications with contemporary artists, including Atelier van Lieshout, Sophie Calle, Chuck Close, Franz Gertsch, Barbara Kruger, Dan Perjovschi, Neo Rauch, Roman Signer, and Erwin Wurm. Gary Tinterow is the newly named director of the Museum of Fine Arts, Houston. During his 27-year tenure at the Metropolitan Museum in New York he organized dozens of exhibitions on European painters of the last two centuries, from Ingres and Gericault to Picasso and Matisse. In 2007 he organized Neo Rauch: Para. Hans Werner Holzwarth is a book designer and editor based in Berlin, with numerous publications mainly on contemporary art and photography. For TASCHEN he has edited, among other titles, Jeff Koons, Christopher Wool, Albert Oehlen and Neo Rauch.