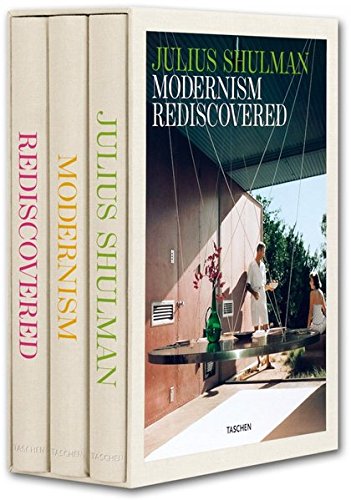 "The Master of Modern: An Oral History in the Making" - Click here to read the article"

"Modernism Rediscovered" brought to light for the first time some 300 forgotten architectural masterpieces, drawn from photographer Julius Shulman's personal archives. Paying tribute to houses and buildings that had slipped from public view, Shulman's stunning photographs uncovered a rarely seen side of California Modernism. This extensive, three-volume follow-up to that remarkable volume brings hundreds more architectural gems into the spotlight. The photographs, most of which are published here for the first time in a book, depict buildings by Albert Frey, Louis Kahn, John Lautner, Le Corbusier, Ludwig Mies van der Rohe, Richard Neutra, and more, as well as the work of many lesser known architects. Not just restricted to the West Coast this time, the images were taken all across the United States as well as in Mexico, Israel, and Hong Kong. Widely considered the greatest architectural photographer of our time, Julius Shulman has once again opened his archives so that we may rediscover the world's hidden Modernist treasures.