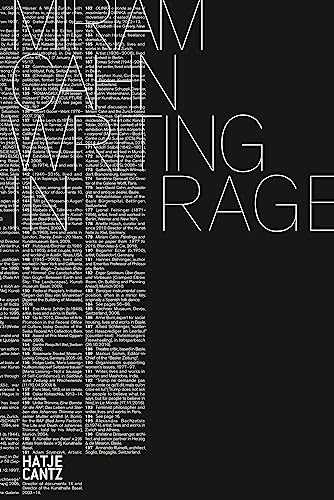 If some of Cahn's images are unexpected or unsettling, it is because, quite simply, they are the expressions of a very self-aware woman's unapologetic point of view.--Edward M. G mez "Hyperallergic "

The Swiss artist Miriam Cahn (*1949, Basel) deals with political and social themes in oil paintings; charcoal, chalk, and colored and lead pencil drawings; and in photographs, films, and installations. Strong color is characteristic of her work, forming a stark contrast to the recurring motifs of violence, tenderness, war, destruction, and physical infirmity. Her habit of commenting upon her work in writing is a golden thread running throughout Cahn’s career. She illuminates her own art, commenting in the process on art and world events, and she sets up the texts opposite her artworks in exhibitions and publications.DAS ZORNIGE SCHREIBEN is the first compilation of her writing by itself, and includes essays, journal entries, and correspondence with friends, foes, family members, and gallerists. The book provides very personal insights into Cahn’s life, her family, and the art market, introducing the reader to a disputatious, independent spirit.