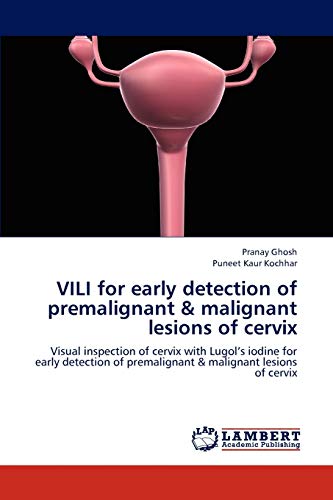 Most cervical cancer cases are diagnosed at an advanced stage as cytology based screening programmes are ineffective in developing countries. This study was done to look for carcinoma cervix and its precursors by visual inspection with Lugol’s iodine (VILI), visual inspection with acetic acid (VIA) & Pap smear, and to analyze their sensitivity, specificity & predictive values using colposcopic directed biopsy as reference. 350 women were subjected to Pap smear, VIA, VILI and colposcopy. Cervical biopsy & endocervical curettage was taken from patients positive on any of these and in 10% of negative cases. Pap smear was abnormal in 3.71%, including 2.85% low grade & 0.85% high grade squamous intraepithelial lesions. 13% of patients were found to be positive by VIA & 11.71% were positive on VILI. Sensitivity for VIA, VILI & Pap smear was 89.5, 100 & 52.6 %, respectively, while the specificity for VIA, VILI & Pap smear was 91.2, 93.3 & 99.1%, respectively. Thus, in low resource settings, cervical cancer screening by Pap smear can be replaced by visual methods like VILI, which has the highest sensitivity (100%) to detect any grade of dysplasia, and a good specificity (93.3%).

Dr Pranay Ghosh (MBBS, MD, M.Med.Sci ART) is an Indian gynecologist, with a special interest in reproductive immunology & role of stem cells in reproductive medicine. He has publications in various journals & has written chapters in several textbooks. He has also been a renowned speaker at many conferences & has several awards to his credit.