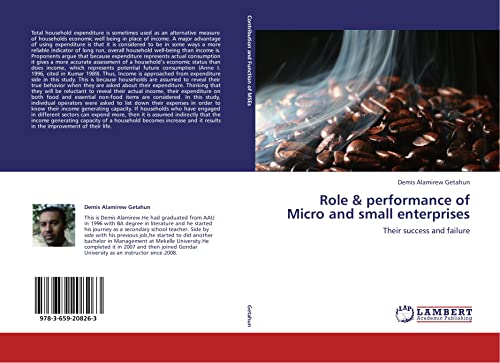 Total household expenditure is sometimes used as an alternative measure of households economic well being in place of income. A major advantage of using expenditure is that it is considered to be in some ways a more reliable indicator of long run, overall household well-being than income is. Proponents argue that because expenditure represents actual consumption it gives a more accurate assessment of a household's economic status than does income, which represents potential future consumption (Anne I. 1996, cited in Kumar 1989). Thus, Income is approached from expenditure side in this study. This is because households are assumed to reveal their true behavior when they are asked about their expenditure. Thinking that they will be reluctant to reveal their actual income, their expenditure on both food and essential non-food items are considered. In this study, individual operators were asked to list down their expenses in order to know their income generating capacity. If households who have engaged in different sectors can expend more, then it is assumed indirectly that the income generating capacity of a household becomes increase and it results in the improvement of their life.

This is Demis Alamirew.He had graduated from AAU in 1996 with BA degree in literature and he started his journey as a secondary school teacher. Side by side with his previous job,he started to did another bachelor in Management at Mekelle University.He completed it in 2007 and then joined Gondar University as an instructor since 2008.