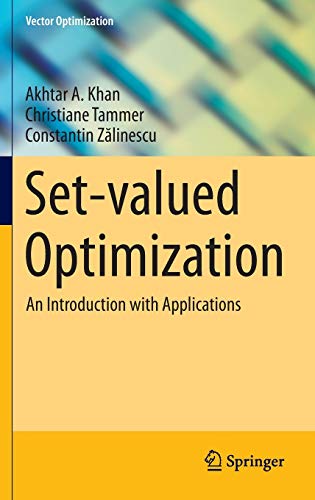 “In this monograph, the first one entirely devoted to the subject, the authors present a unified treatment of the state of the art of most of the developments in this field. ... It is very well written and contains numerous results and examples and over 600 references. ... I wholeheartedly recommend this book to anyone interested in new trends in optimization, in particular, researchers who are interested in multiobjective/vector-optimization and its interconnection with variational analysis.” (Miguel Sama, Mathematical Reviews, December, 2015)

“The monograph contains a very large number of interesting, new or at least recent results not only in the fields of set-valued optimization together with many examples illustrating them. It is an interesting scientific resource for all researchers investigating problems of mathematical optimization. I can highly recommend it to graduate and PhD students as well as to scientists working in the fields of nonsmooth, multicriterial or set-valued optimization.” (S. Dempe, Optimization, July, 2015)

Set-valued Optimization : An Introduction with Applications