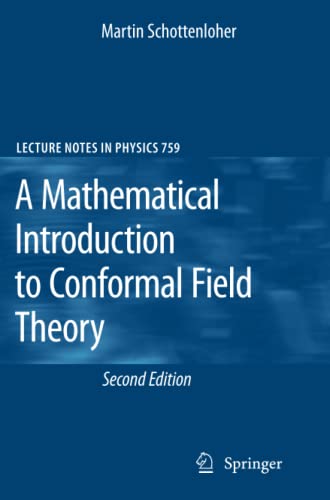 From the reviews of the second edition:

"The book under review is the second ... edition of the original text, thereby reflecting various recent developments in the field during the past ten years, on the one hand, and making especially the physics part of the notes more detailed, self-contained and tutorial on the other. ... this highly appreciated mediator between contemporary mathematics and physical quantum field theory has grown into an even more valuable source for students, teachers, and active researchers in this fascinating area of modern science." (Werner Kleinert, Zentralblatt MATH, Vol. 1161, 2009)

“The second edition of this classical introduction to conformal field theory for a mathematically oriented audience has been substantially revised and expanded ... . many new examples and statements have been included throughout the whole text. ... Completeness, the extremely clear exposition and well-chosen references at the end of each chapter make this introduction an unmissable reference for the mathematician aiming to learn the basics of conformal field theory.” (Domenico Fiorenza, Mathematical Reviews, Issue 2011 a)

The first part of this book gives a self-contained and mathematically rigorous exposition of classical conformal symmetry in n dimensions and its quantization in two dimensions. The second part surveys some more advanced topics of conformal field theory.

Buchbeschreibung Taschenbuch. Zustand: Neu. Druck auf Anfrage Neuware -The first part of this book gives a detailed, self-contained and mathematically rigorous exposition of classical conformal symmetry in n dimensions and its quantization in two dimensions. In particular, the conformal groups are determined and the appearance of the Virasoro algebra in the context of the quantization of two-dimensional conformal symmetry is explained via the classification of central extensions of Lie algebras and groups. The second part surveys some more advanced topics of conformal field theory, such as the representation theory of the Virasoro algebra, conformal symmetry within string theory, an axiomatic approach to Euclidean conformally covariant quantum field theory and a mathematical interpretation of the Verlinde formula in the context of moduli spaces of holomorphic vector bundles on a Riemann surface.The substantially revised and enlarged second edition makes in particular the second part of the book more self-contained and tutorial, with many more examples given. Furthermore, two new chapters on Wightman's axioms for quantum field theory and vertex algebras broaden the survey of advanced topics. An outlook making the connection with most recent developments has also been added. 268 pp. Englisch. Artikel-Nr. 9783642088155