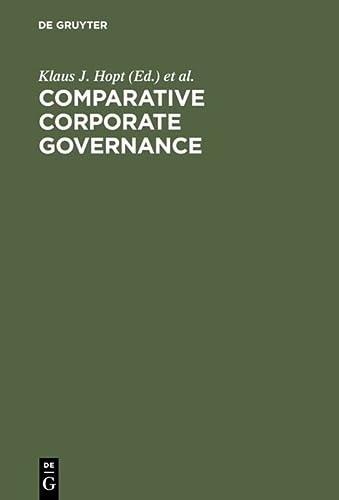 Corporate governance has become an important issue in all industrial economies. It relates to the internal organization and power structure of the firm, the functioning of the board of directors both in the one-tier and the two-tier system, the ownership structure of the firm, and the interrelationships among management, board, shareholders and possibly stakeholders, in particular the workforce of the enterprise and the creditors. These interrelationships include monitoring of the management by the board and external supervisors, and shareholders activism. This book has grown out of a conference entitled "Comparative Corporate Governance, An International Conference, United States - Japan - Western Europe" which was held in Brussels on 14 June 1995. It was organized by the Financial Law Institute of the University of Ghent, and the Study Centre on Groups of Enterprises in Brussels under the scientific direction of Eddy Wymeersch. The book contains the contributions by the speakers in an enlarged and updated form together with source material and references. The editors have collected a selection of 18 documents on corporate governance from seven countries (United Kingdom, USA, Canada, France, Germany, the Netherlands and Belgium). These documents date from the 1990s, most of them from 1995 and 1996, and are to be made available more easily to business and academia in other countries than the one in which they have been elaborated. They offer a wealth of data, insights, self-regulatory experiences and legislative proposals which show that, despite all the national deep-rooted differences, the core problems are very similar indeed.