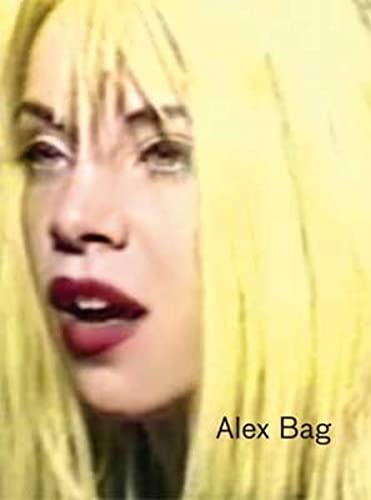 In 1995, as Matthew Barney became famous for his opulent, surrealist film epic, video artist Alex Bag rose to stardom as a kind of anti-Cremaster, creating no-budget video art with little more than cheap wigs, bedsheet backdrops, appropriated television clips, and stuffed animals.
The book contains stills, photographs, reproductions of her notebook pages, essays by critics, and scripts for the videos. Reading these screenplays shifts the focus from the brilliance of Bag's performances and her purposefully makeshift art direction to the strength of her writing. Her pitch-perfect use of vernacular speech and mastery of of plot and character become clearer, underscoring what's long been known - she is a comic genuis, and one of the world's coolest harridans.--Johanna Fateman "Bookforum "

Since the mid 1990s, Alex Bag (*1969, lives and works in New York) has been one of the most interesting protagonists of video performance, and she is regarded as a vital reference point by an entire generation of younger artists such as Cory Arcangel and Shana Moulton. She became known for her technically simple video performances, in which she humorously took on and exploited TV culture and its most varied formats, as well as the art system and its romantic (artist) conceptions. With convincing precision, Bag cultivated a profound critique of the market system and society, and often appeared herself, as an extraordinarily agile and transformable actor taking on a multitude of roles. In the video that brought her to attention, "Untitled Fall '95" (1995), she played an art student who, as though in a video diary, depicted her desires and hopes as an artist and in her everyday schooling. In other videos she has frequently investigated the advertising structures in network TV (as in "Coven Services," 2004), or diverse TV genres and formats (as in "Fancy Pantz," 1997, and "Gladia Daters," 2005). Elements from advertising, film, and music videos, documentary and reality TV flow into her artistic work, which persistently generate a major critique of today's neoliberal societal structures.