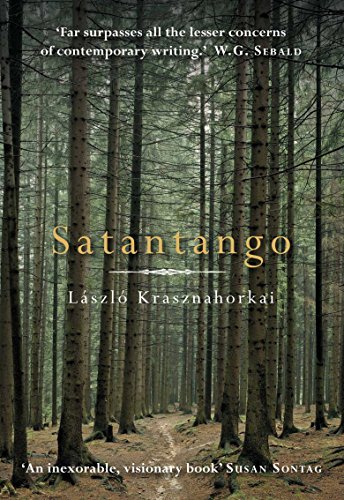 This majestic translation finally gives us its inimitable, nightmarish pleasures at first hand * Sunday Times * Regarded as a classic, Satantango is a monster of a novel: compact, cleverly constructed, often exhilarating, and possessed of a distinctive, compelling vision... It is brutal, relentless and so amazingly bleak that it's often quite funny. This is an obviously brilliant novel. Krasznahorkai is a visionary writer... The grandeur is clearly palpable. -- Theo Tait * Guardian * Intoxicating and exhilarating, bleak yet beautiful, Satantango is a modern masterpiece that manages to speak both of its time and to transcend it altogether -- Beth Jones * Sunday Telegraph *

Winner of the 2015 Man Booker International Prize In the darkening embers of a Communist utopia, life in a desolate Hungarian town has come to a virtual standstill. Flies buzz, spiders weave, water drips and animals root desultorily in the barnyard of a collective farm. But when the charismatic Irimias - long-thought dead - returns to the commune, the villagers fall under his spell. The Devil has arrived in their midst. Irimias will divide and rule: his arrival heralds the beginning of a period of violence and greed for the villagers as he sets about swindling them out of a fortune that might allow them to escape the emptiness and futility of their existence. He soon attains a messianic aura as he plays on the fears of the townsfolk and a series of increasingly brutal events unfold. Satantango follows the villagers as they are exploited and taken in by Irimias; as they drink and stumble their way toward the gradual realization of their mistake and ultimate demise. In its measured prose and long, Tolstoyan sentences, Satantango is nothing short of a literary masterpiece; a formal meditation on death and avarice, human fallibility and faith.