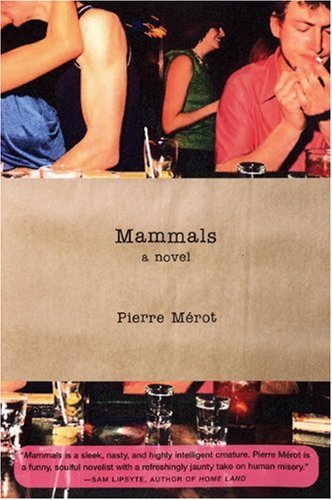 "An audacious burlesque ... Merot is a fine writer, brilliant, witty and with an unusual sense of mercy for the least fortunate in the urban fauna. ... Mammals is an exceptional novel, of many bars, much barcrawling, many long nights, insatiably thirsty drunks and lives gone off the rails."

One of the most internationally noteworthy titles from Europe in recent years, "Mammals" is a witty anatomization of modern life. Caustic, comic, and unflinchingly honest, "Mammals" is a cruel but beautiful tale of love, solitude, alcoholism, family, and unemployment. This fictional memoir of a glorious loser recounts the life of the Uncle, an unhappy Parisian bachelor whose only true loves were a Polish girl and a divorcee. He is a drunk; he is sarcastic; he works and fails desultorily in several fields until he winds up surrounded by neurotic women, a teacher in a secondary school. He tries out therapist after therapist and can't figure out who is the butt of the joke. He has nephews and this makes him nervous. In fact, almost everything about family life makes him nervous -- especially now that he's living at home again. He coins proverbs for living with lowered expectations and attempts a bestiary of his pathological parents, the mammals of the title. Riding its handbasket merrily to hell, veering now and then toward overwhelming lyricism, "Mammals" pieces together the portrait of modern society's Everyman. It establishes Pierre Merot as an extraordinary and delightful voice of international stature.