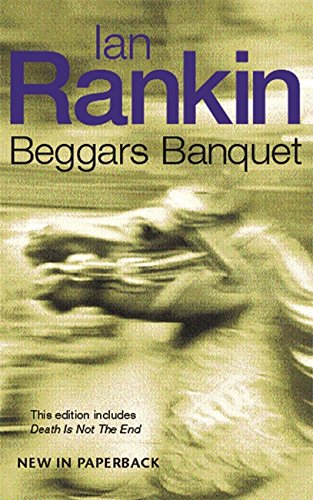 Radio 4 are currently repeating a five-part series of readings of BEGGARS BANQUET at 7.45pm on Sunday evenings from 22 June to 20 July. BESTSELLERSScottish No 1 Bestseller in GLASGOW HERALD INTERVIEWS:Mail on Sunday (27 April), Property on Sunday interview with Ian on 'Why I live Where I live' REVIEWS: 'This collection proves that Rankin is a skilled practitioner of the difficult art of crime fiction in miniature...His territory - the Edinburgh of sink estates, drugs and disordered lives - does provide the backdrop for the most memorable stories here. And there is one tale, set in 18th-century Edinburgh, that suggests that Rankin as historical novelist would be well worth reading'SUNDAY TIMES 'Ian Rankin's 14th thriller in his outstanding Inspector Rebus series - A Question of Blood - is released by Orion this August. We at Midweek Towers, therfore, recommend that those of you unfamiliar with his oeuvre shouldpack your suitcases with his back catalogue as you head off for sunnier climes''Midweek Classic in NINE TO FIVE/MIDWEEK MAGAZINE 'Dip in and let the stories come to you, and you're rewarded by the craft and guile of a master thriller writer. Not just for Rankin's usual huge number of fans, but for all lovers of fine crime writing'GOOD BOOK GUIDE 'It seems to be accepted wisdom thatshort stories don't sell, which is a pity when there are collections as goodas these on the market...Rankin proves with this collection that he is a superb storyteller who can tackle anything with confidence, from the twisted mind of a serial killer to the luckiest comedian around'NORTHAMPTON CHRONICLE AND ECHO 'These tales not only explore the human condition but also the inner life of a city like no other'GREENOCK TELEGRAPH 'There is always a clever twist...Yes I will read them again over the next year'Reader Jury, BRADFORD TELEGR

Over the years, Ian Rankin has amassed an incredible portfolio of short stories. Published in crime magazines, composed for events, broadcast on radio, they all share the best qualities of his phenomenally popular Rebus novels.

Ten years ago, A GOOD HANGING - Ian's first short story collection - demonstrated this talent and now after nearly a decade at the top of popular fiction, Ian is releasing a follow-up.

Ranging from the macabre ('The Hanged Man') to the unfortunate ('The Only True Comedian') right back to the sinister ('Someone Got To Eddie') they all bear the hallmark of great crime writing. Of even more interest to his many fans, Ian includes seven Inspector Rebus stories in this collection . . .