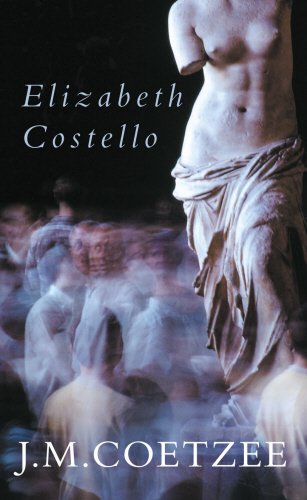 Elizabeth Costello is an Australian writer of international renown; she is f-ted, studied, honoured. Famous principally for an early novel that established her reputation and from which, it seems, she will never escape, she has reached the stage, late in life, where her remaining function is to be venerated and applauded. One of a new breed of intellectual nomads, her life has become a series of engagements in sterile conference rooms throughout the world - a private consciousness obliged to reveal itself to a curious public: the presentation of a major award at an American college where she is required to deliver a lecture; a sojourn as the writer in residence on a cruise liner during which she encounters a fellow guest lecturer, an African poet also employed to divert the passengers; a visit to her sister, a missionary in Africa, who is receiving an honorary degree, an occasion which both recognise as the final opportunity for effecting some form of reconciliation; and a disquieting appearance at a writers' conference in Amsterdam where she finds the subject of her talk unexpectedly amongst the audience. She has made her life's work the study of other people yet now it is she who is the object of scrutiny. But, for her, what matters is the continuing search for a means of articulating her vision and the verdict of future generations. Elizabeth Costello is a humane, moral, and uncompromising creation; J. M. Coetzee's latest work of fiction offers us a profound and delicate vision of literary celebrity, artistry and the private life of the mind.

J. M. Coetzee’s work includes Waiting for the Barbarians, Life & Times of Michael K, Boyhood, Youth, Disgrace, Summertime and The Childhood of Jesus. He was the first author to win the Booker Prize twice and was awarded the Nobel Prize for Literature in 2003.