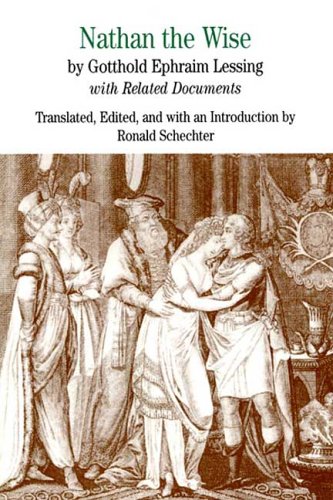 One of the most frequently performed and widely read comedies of the eighteenth century, Gotthold Ephraim Lessing's Nathan the Wise (1779) combines rich characterization with an engaging plot. Set in Muslim-ruled Jerusalem at the time of the Crusades, it deals with universal themes -- including the nature of God, antisemitism, wealth and poverty, and the conflict between love and duty. Today the play is as timely as ever. This edition, the first English version expressly intended for undergraduates, contains an insightful introduction that discusses the play, Lessing and the Enlightenment, and the situation of Jews in eighteenth-century Europe. Additionally, there are five related historical documents -- each with a context-setting headnote -- illustrations, a chronology, questions for consideration, and a selected bibliography.

RONALD SCHECHTER is associate professor of history at the College of William and Mary, where he teaches a wide variety of courses in European history. He received his doctorate from Harvard University and completed a postdoctoral fellowship at the University of Heidelberg. Professor Schechter is the author of Obstinate Hebrews: Representations of Jews in France, 1715-1815 (2003) and the editor of The French Revolution: The Essential Readings (2001). He has published articles in Past and Present, Representations, Eighteenth-Century Studies, and Historical Reflections/Réflexions historiques and is the early modern Europe section editor for History Compass.

Buchbeschreibung Zustand: Good. Good condition. A copy that has been read but remains intact. May contain markings such as bookplates, stamps, limited notes and highlighting, or a few light stains. Artikel-Nr. B04B-01457