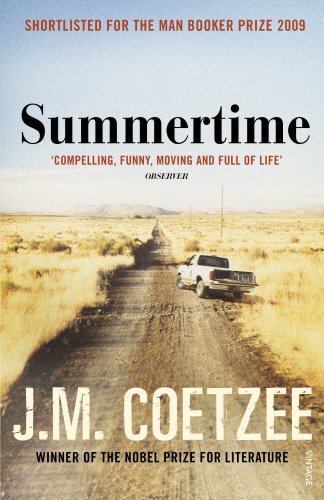 "This is the third instalment of a life so reserved, so repressed, so seething with polite rage and restrained despair that it could only be approached through a third-person voice...it is wonderful stuff. But then, Coetzee is wonderful: edgy, black, remorselessly human, witty, and often outright funny...Summertime is offbeat and deliberate, elusive and truthful" (Irish Times)

"The cumulative effect of Coetzee's unblinking honesty and his never-wavering seriousness, is an understanding of the creation of a great writer" (Sunday Telegraph)

"Both an elegant request that the sum of Coetzee's existence as a public figure be looked for only in his writing, and ample evidence, once again, why that request should be honoured" (Observer)

A young English biographer is working on a book about the late writer, John Coetzee. He plans to focus on a period in the seventies when, the biographer senses, Coetzee was 'finding his feet as a writer'.
He embarks on a series of interviews with people who were important to Coetzee - a married woman with whom he had an affair, his favourite cousin Margot, a Brazilian dancer whose daughter had English lessons with him, former friends and colleagues. Thus emerges a portrait of the young Coetzee as an awkward, bookish individual, regarded as an outsider within the family. His insistence on doing manual work, his long hair and beard, and rumours that he writes poetry evoke nothing but suspicion in the South Africa of the time.