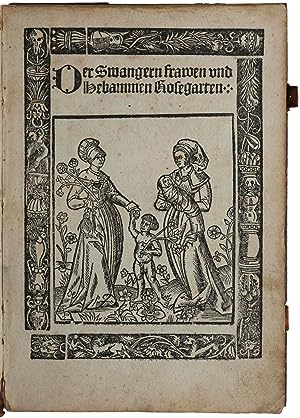 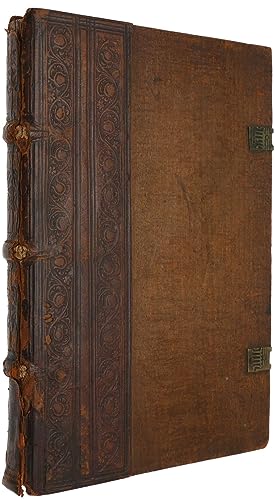 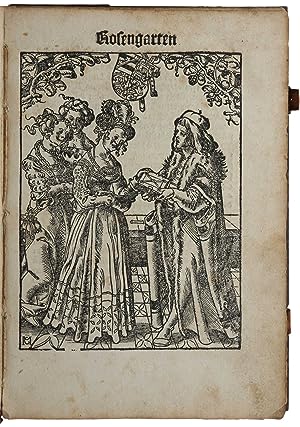 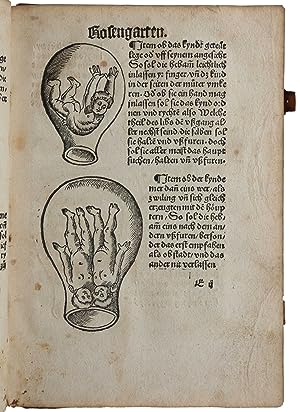 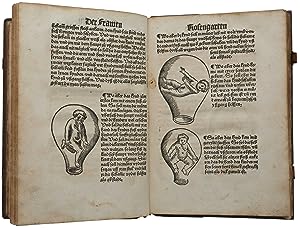 THE EARLIEST PRINTED TEXTBOOK FOR MIDWIVES. An exceptionally fine copy, in an untouched contemporary binding, of one of three editions of this landmark work published at about the same time, this probably being the third (see below). This is the earliest printed textbook for midwives and one of the first printed books devoted to obstetrics, including engravings attributed to the Frankfurt artist Martin Kaldenbach, a pupil of Albrecht Dürer. Although copies of these editions occasionally appear on the market, they are almost always in poor condition, and usually rebound, as a result of extensive use over the centuries. "The most important items in my collection of rare obstetrical books are the 1513 editions of the famous obstetrical textbook, Der Swangern Frauwen und Hebammen Roszgarten by Eucharius Roesslin, a physician from Worms. All three were published in the same year but each was set up and printed differently (Nos. 1, 2, 3). One is dated; the other two are not. There is, of course, no way of knowing which of these three was the real first edition" (Hellman). All three editions are extremely rare. "Roesslin's obstetrical treatise, first published in German in 1513 under the title Der swangern Frawen und hebammen roszgarten, had an enormous impact on contemporary obstetrical practice and remained influential for two hundred years, going through over one hundred editions before the close of the eighteenth century. The work contained little original material, being primarily a survey of Greek and Roman obstetrical literature, but it was the first to deal with obstetrics as a separate subject, and the first to print illustrations of the birth chair and the fetus in utero. It was also the first obstetrical work written especially for midwives, which was the reason for its originally appearing in the vernacular" (Norman). ABPC/RBH record no other copy sold at auction in the last 35 years, and when this copy was sold in 1985 Sotheby's noted that "All these early editions of 1513 are extremely rare; none is recorded as having been sold by auction in England or Germany with the exception of the Hellman-Gunn set sold in London at Bonham's in 1979, which included a rather poor copy of the present issue. It appears that there is only one copy of this issue in America, at the National Library of Medicine, lacking the last signature." OCLC lists copies of the two undated issues (see below) in US at Duke, KSU, Minnesota, Nebraska and Yale, but does not distinguish between them. Provenance: London bookseller and bibliophile Irving Davis (sold Sotheby's, 2-3 April 1985, Ł18,700); from the library of Jean Blondelet. "What is the importance of this rare work, usually referred to as "Rosengarten"? The opinion held until recent times that this was the first printed work dealing exclusively with obstetrical knowledge is erroneous. In 1476 the Secreta Mulierum of Albertus Magnus made its appearance in print, and about 1495 the Buechlein der Schwangeren Frauen, the so-called "Frauenbuechlein" by Ortolff von Bayerland, also appeared. Both of these can be called obstetrical monographs. The significance of the "Rosengarten" is not due to its being the first printed obstetrical work, but rather to the fact that its text and illustrations resumed a tradition, broken for almost fifteen hundred years. Roesslin's famous pictures of the position of the child closely resemble the sixteen in the manuscripts of antiquity, i.e., Mustio's catechism of women's diseases and midwifery, largely based on Soranus of Ephesus (see Sarton I, 98, 138). "Not only does Roesslin's booklet point back to the distant past, but it also had an enormous influence on the obstetrical practices of the midwives and surgeons of his own time. Latin, the universal language of scholars at that period, was not comprehensible to Roesslin's public. His book in the vulgar tongue or vernacular, the language of the common people, was therefore popular. The great number of reprints of the G. Bestandsnummer des Verkäufers 4006