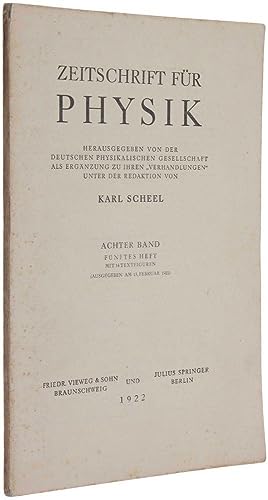 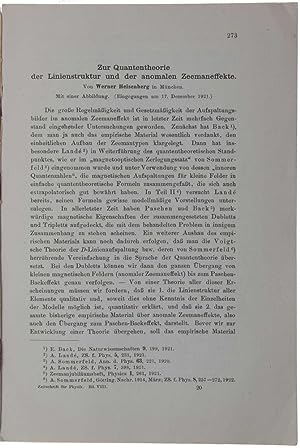 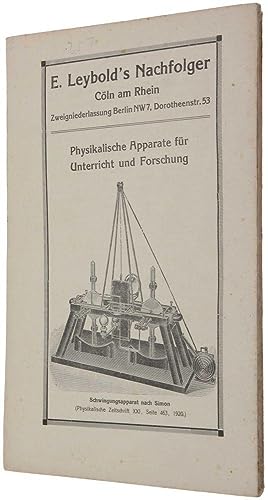 HEISENBERG'S FIRST PUBLISHED PAPER. First edition of Heisenberg's first published paper, journal issue in original printed wrappers, describing his 'core model' of the atom and its application to solve the problems of the multiplet structure in atomic spectra and the anomalous Zeeman effect, which had defeated all previous attempts. "Just a year after entering Sommerfeld's program, Heisenberg amazed his teacher by presenting a model of atoms that seemed to resolve every spectroscopic riddle at a stroke. But the model succeeded only because its daring inventor failed to follow the requirements of an acceptable quantum theory" (Cassidy, Beyond Uncertainty, p. 95). "Werner Heisenberg had just celebrated his twentieth birthday when he presented his first paper for publication in 1921. This paper, a long and complex study entitled 'On the Quantum Theory of Line Structure and of the Anomalous Zeeman Effects,' immediately placed its young author on the forefront of theoretical spectroscopy. 'He understands everything,' Niels Bohr remarked. But, as often happens with brilliant first papers, its unique proposals were as controversial and perplexing as the phenomena they purported to explain" (Cassidy, 'Heisenberg's first paper,' Physics Today 31 (1978), p. 23). "In 1922 he publicly displayed his audacity-and his intuition-in his first published paper, which offered a model for the Zeeman effect [the splitting of atomic spectral lines when a magnetic field is applied] that described all of the known data in terms of the couplings between valence electrons and the remaining atomic 'core' electrons. The model, however, violated many of the basic principles of quantum theory and classical mechanics. It thus served both as the basis for most of the subsequent work on the Zeeman effect until the advent of electron spin and as the first indication of the radical changes required for solving the quantum riddle. The core model brought its author to the attention of established theoreticians. Sommerfeld had already written to his colleagues about Heisenberg's work when, in June 1922, he brought his student to GŲttingen for a series of lectures on quantum atomic physics presented by Bohr. Heisenberg's audacious criticism of one of Bohr's assertions and a subsequent confrontation between the two over the core model resulted in a mutual admiration and the beginning of a lifelong collaboration that was as important for Heisenberg as his collaboration with Pauli" (DSB). Sommerfeld's own attempt to solve the same problems precedes Heisenberg's paper in the same issue. "The Bohr theory of atoms and molecules, Sommerfeld's "quantum theory of spectral lines," and the correspondence principle of 1918. formed the foundations of the Bohr quantum theory. This theory provided in turn the basis for model interpretations of most, but not all, existing phenomena of empirical spectroscopy. Two phenomena, multiplet line spectra and the anomalous Zeeman effect, continually resisted explanation by quantized mechanical models" (Cassidy, pp. 191-192). The eighteen-year-old Heisenberg entered Sommerfeld's institute in the winter semester of 1920-21, and Sommerfeld immediately introduced him to the Bohr theory. In June 1921 Alfred Landť gave a phenomenological explanation of the splittings observed in the anomalous Zeeman effect, but he did not propose any physical interpretation of his theory, writing to Bohr: "With regard to the complicated types of the Zeeman effect, I have found a few empirical rules which. permit one to make predictions regarding the neon spectrum. But what these rules signify is entirely incomprehensible to me." Sommerfeld suggested that Heisenberg should try to find a model to explain Landť's rules. The result was the present paper, submitted in his third semester, when he was just twenty years old. "In it he claimed that he was presenting the essential details of a complete quantum-theoretical "model interpretation" of the empirical regularities. Bestandsnummer des Verkšufers 3527