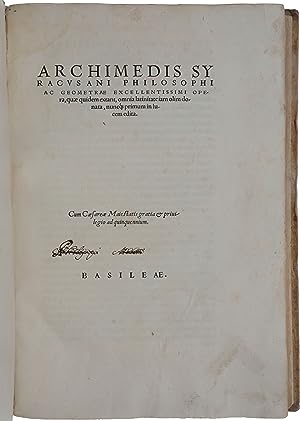 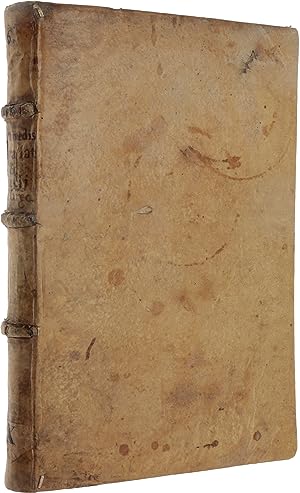 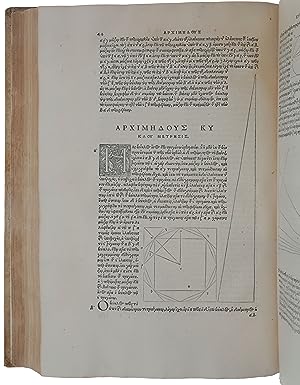 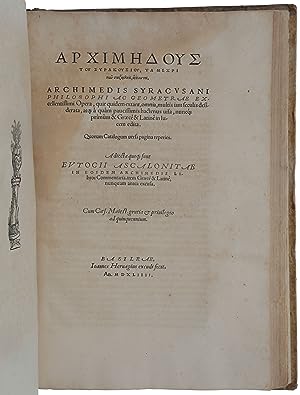 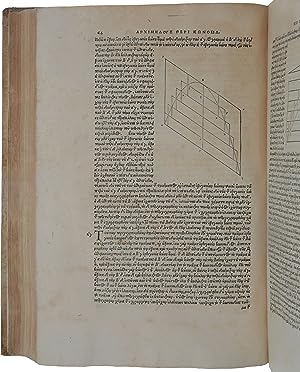 PMM 72 - 'GIVE ME A PLACE TO STAND, AND I WILL MOVE THE EARTH'. First edition of one of the key scientific books of the Renaissance, representing a decisive step forward in the history of mathematics, containing the first printings of the majority of the surviving works of the greatest mathematician, physicist and engineer of antiquity. This book constitutes "the first printing of the original Greek text of seven Archimedean mathematical texts, accompanied by Jacopo de Cremona's Latin translation from a manuscript corrected by Regiomontanus, and the commentaries (in both Greek and Latin) of the sixth-century mathematician Eutocius of Ascalon" (Norman). "Archimedes - together with Newton and Gauss - is generally regarded as one of the greatest mathematicians the world has ever known, and if his influence had not been overshadowed at first by Aristotle, Euclid and Plato, the progress of modern mathematics might have been much faster. As it was, his influence began to take full effect only after this first printed edition which enabled Descartes, Galileo, and Newton in particular to build on what he had begun" (PMM). The seven treatises included in the present work are: On the Sphere & Cylinder; On the Measurement of the Circle; On Conoids & Spheroids; On Spirals; On the Equilibrium of Planes (and Centres of Gravity); The Arenarius, or Sand-Reckoner; and On the Quadrature of the Parabola. "Publication of this editio princeps inspired a multiplication of texts on Archimedes and his methods, which exerted a strong influence on the development of mathematics during the sixteenth and seventeenth centuries. One of the important effects of that influence can be seen in Kepler's Astronomia nova (1609), in which Archimedes' so-called 'exhaustion procedure' was applied to the measurement of time elapsed between any two points if Mars's orbit" (Norman). "Apart from one small tract published in 1503 and an imperfect edition by Tartaglia in 1543, [this] is the first complete edition of Archimedes' works" (PMM). This volume also includes for the first time the description of the heliocentric system of Aristarchus, who had conceived this theory centuries before Copernicus. "The principal results in On the Sphere and Cylinder (in two books) are that the surface area S of any sphere of radius r is four times that of its greatest circle (in modern notation, S = 4Ď r2) and that the volume V of a sphere is two-thirds that of the cylinder in which it is inscribed (leading immediately to the formula for the volume, V = 4/3Ď r3). Archimedes was proud enough of the latter discovery to leave instructions for his tomb to be marked with a sphere inscribed in a cylinder. Marcus Tullius Cicero (106-43 BC) found the tomb, overgrown with vegetation, a century and a half after Archimedes' death. "Measurement of the Circle is a fragment of a longer work in which Ď , the ratio of the circumference to the diameter of a circle, is shown to lie between the limits of 3 10/71 and 3 1/7. Archimedes' approach to determining Ď , which consists of inscribing and circumscribing regular polygons with a large number of sides, was followed by everyone until the development of infinite series expansions in India during the 15th century and in Europe during the 17th century. That work also contains accurate approximations (expressed as ratios of integers) to the square roots of 3 and several large numbers. "On Conoids and Spheroids deals with determining the volumes of the segments of solids formed by the revolution of a conic section (circle, ellipse, parabola, or hyperbola) about its axis. In modern terms, those are problems of integration. "On Spirals develops many properties of tangents to, and areas associated with, the spiral of Archimedes-i.e., the locus of a point moving with uniform speed along a straight line that itself is rotating with uniform speed about a fixed point. It was one of only a few curves beyond the straight line and the conic sections known in antiqui. Bestandsnummer des Verkäufers 5171