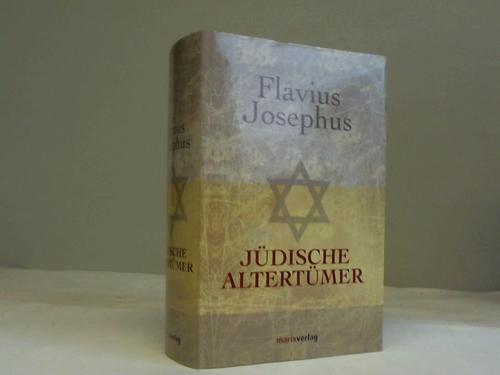 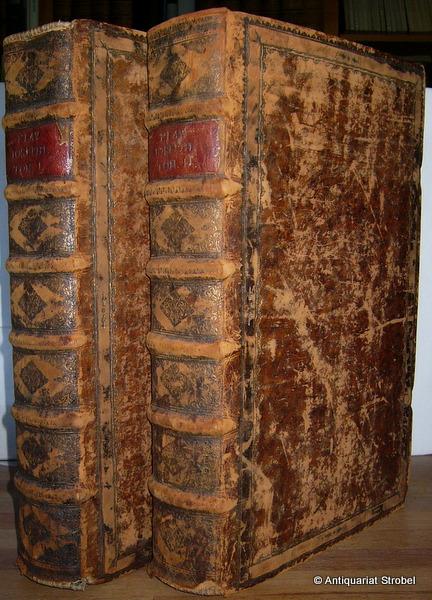 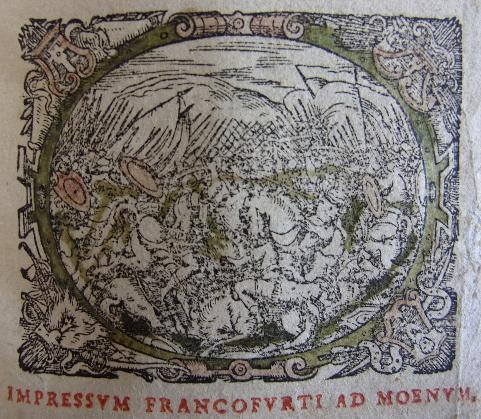 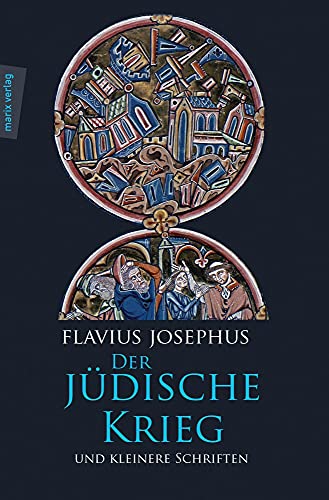 Gut/Very good: Buch bzw. Schutzumschlag mit wenigen Gebrauchsspuren an Einband, Schutzumschlag oder Seiten. / Describes a book or dust jacket that does show some signs of wear on either the binding, dust jacket or pages. Artikel-Nr.: M03865390188-V. 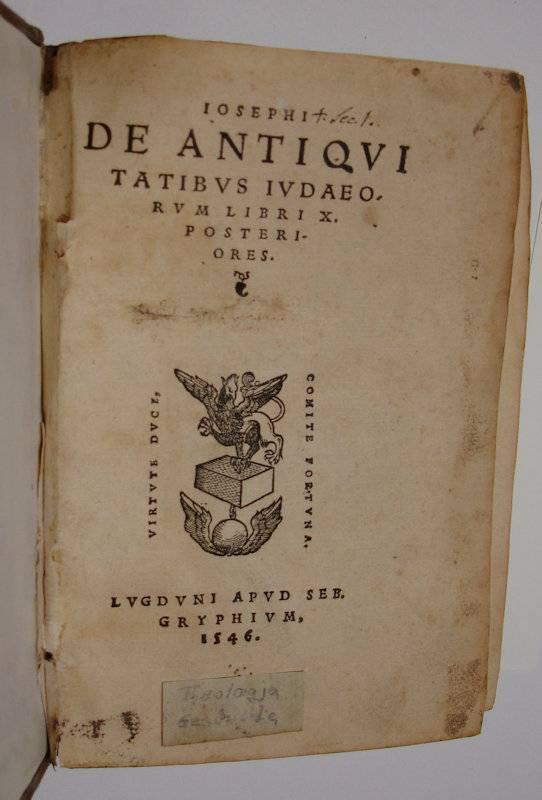 8vo. 2 volumes: (LXXII index),552,(1 blank),(1 printer's mark); 526,(1 blank),(1 printer's mark) p. 20th century leather 18 cm Omnia quae extant opera vol. 1 & 2: De antiquitatibus Iudaeorum libri XX (Ref: Schreckenberg p. 7, Schreckenberg Supplementband p. 167; Hoffmann 2,450; Graesse 3,481) (Details: These 2 volumes are the volumes 1 & 2 of a 3 volume set 'Omnia quae extant opera', and they contain the complete Latin translation of 'De antiquitatibus Iudaeorum libri XX'. Volume 3, with the remaining works of Josephus, is lacking. On the titles are the printer's mark of Sebastianus Gryphius, depicting a griffin, which mythological animal symbolizes courage, diligence, watchfulness, and rapidity of execution, used as a pun of his family name Gryph or Greif. From the claws of this creature hangs a big rectangular stone, symbolizing Constancy, beneath which is a winged globe, symbolizing Fortune. The motto is 'Virtute duce / comite fortuna', 'Virtue thy leader, fortune thy comrade', a quote from a letter of Cicero to Plancus (Epistulae ad Familiares, liber X,3). On the last page of both volumes a woodcut griffin) (Condition: Old leather binding covered with untanned leather. Binding with traces of wear. Front hinge of volume 1 cracking. Flyleaves absent. Both pastedowns of volume 2 renewed. Titles somewhat soiled, and with a small inscription. A name on the first title neatly erased. Small paper label on the title of volume 2. Small tear in title of volume 2 because of overstretch in the margin. Occasional old and small ink underlinings. One old and small ink annotation in German) (Note: Flavius Josephus, born 37/38 A.D., 'was a Jewish priest of aristocratic descent and a Pharisee. Though a zealous defender of Jewish religion and culture, politically he was pro-Roman and without sympathy for extreme Jewish nationalism'. His first work was a history of the First war of Palestine Jews against the Romans, which raged from 66 till 70 A.D., and of which the author was an eyewitness. The war ended with the fall of Jerusalem, the walls and Temple were destroyed and most of its inhabitants were enslaved. Josephus, who tried to follow the objective methods of Thucydides and Polybius, wrote this history in Aramaic, 'of which a Greek translation, the extant 'Bellum Judaicum' in seven books, appeared between 75 and 79. (.) His next work, the 'Antiquitates Judaicae' in twenty books (published 93/94), is a history of the Jews from the Creation to immediately before the outbreak of the war, giving a fuller account of the period from the Maccabees to A.D. 66 than that in 'Bellum Judaicum' and showing a more hostile attitude to Herod the Great'. (OCD 2nd ed. p. 565) Josephus probably wrote this work, sometimes also called 'Judaica Archaeologia', to defend the sacred history of the Jews, and 'to show that Jewish tradition was as ancient and trustworthy as the Egyptian and Mesopotamian traditions and surely preceded Greek culture. (The Classical Tradition, Cambr. Mass., 2010, p. 497) § The 'editio princeps' of the Greek text of the complete works of Josephus was published in Basel in 1544 by Frobenius, and was edited by Arnoldus Peraxylus with the help of Sigismund Gelenius. The 'editio princeps' of the ancient Latin translation of 'De antiquitatibus Judaeorum' was published much earlier, in Augsburg in 1470. (See Schreckenberg p. 1) This translation is sometimes ascribed to the Roman statesman and author Cassiodorus, born ca. 485, died after 580, who served in the administration of Theoderic the Great, king of the Ostrogoths. He however didnot translate it, but he commissioned the translation. He mentions this explicitily in his Institutiones 1:17,1: 'Ut est Iosephus (.). Hunc tamen ab amicis nostris, quoniam est subtilis nimis et multiplex, magno labore in libris viginti duobus converti fecimus in Latinum'. 'Ich habe ihn aber dennoch von meinen Freunden unter viel Mühen- er gilt ja als ungemein scharfsinnig und vielschichtig- in 22 Büchern ins Lateinische übertragen lassen'. (Cassiodor, Institutiones Divinarum, übersetzt und eingeleitet von W. Bürsgens, Freiburg etc., 2003, p. 222/223) This Gryphius edition of 1546 is a reissue of that translation of 1470) (Provenance: In the first title are faintly discernable traces of 6 blind stamped capitals: 'LDDAVH'. A name?) (Collation: alpha-epsilon8, zeta4; a-z8; A-L8, M4; aa-KK8) (Photographs on request) 2000 gr. Artikel-Nr.: 120138. 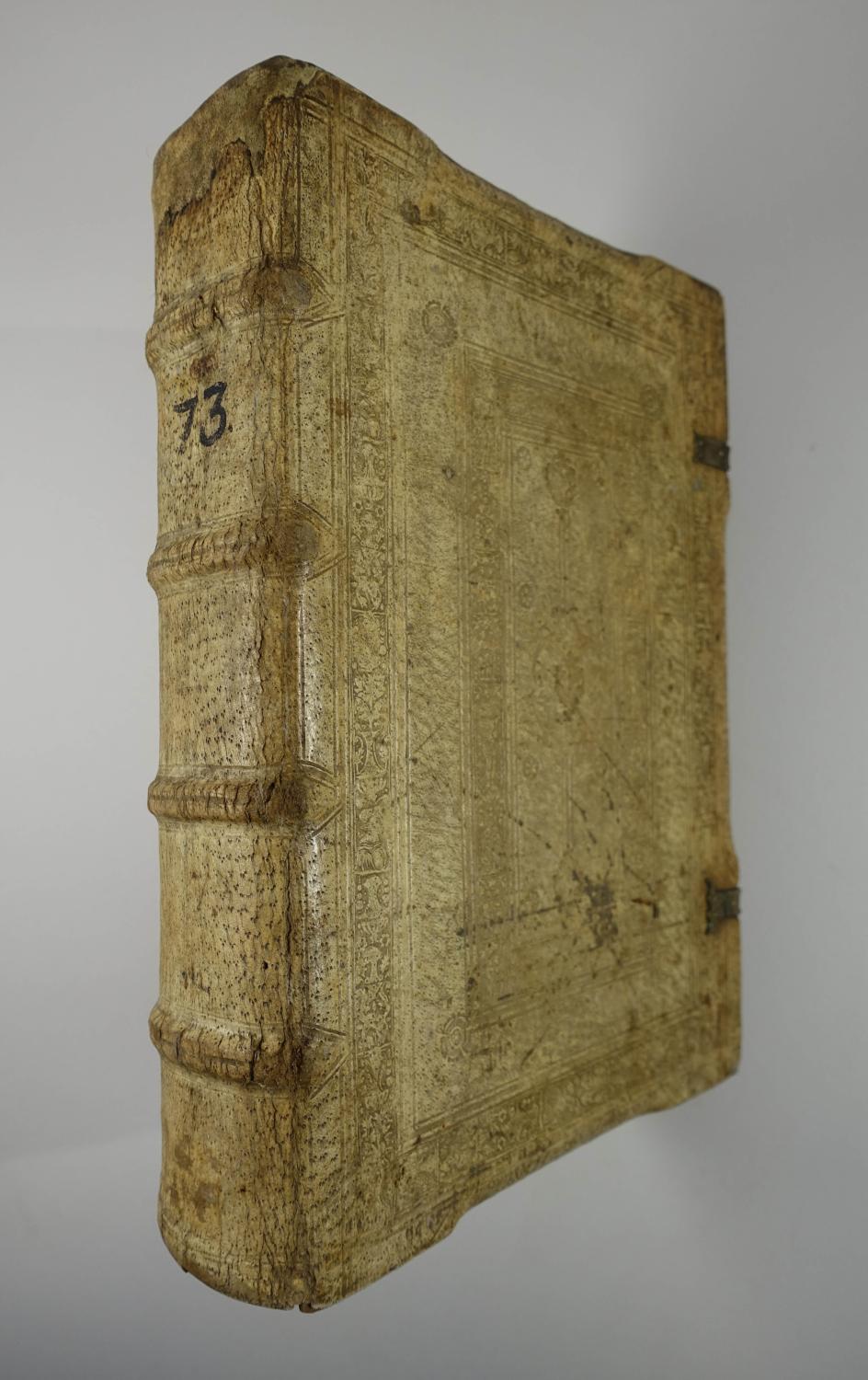 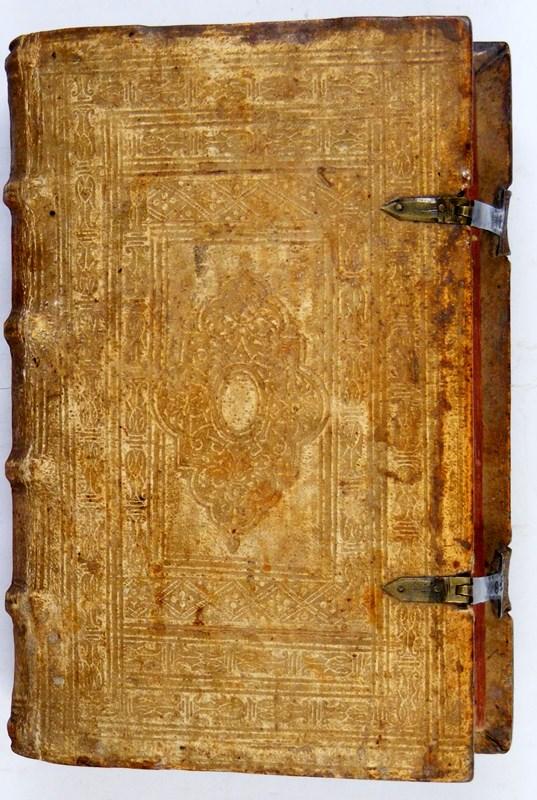 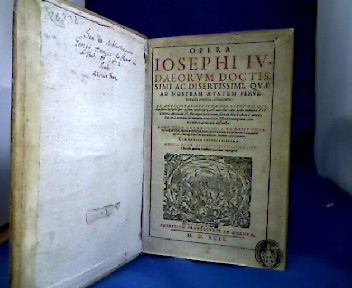 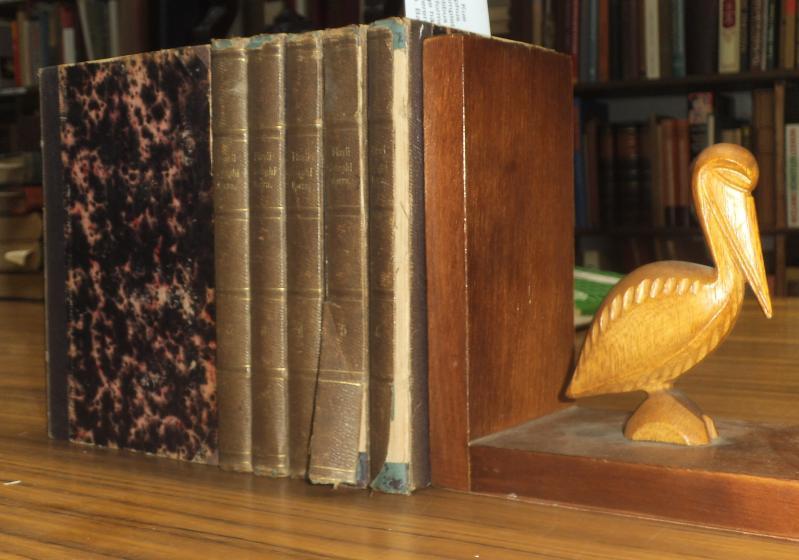 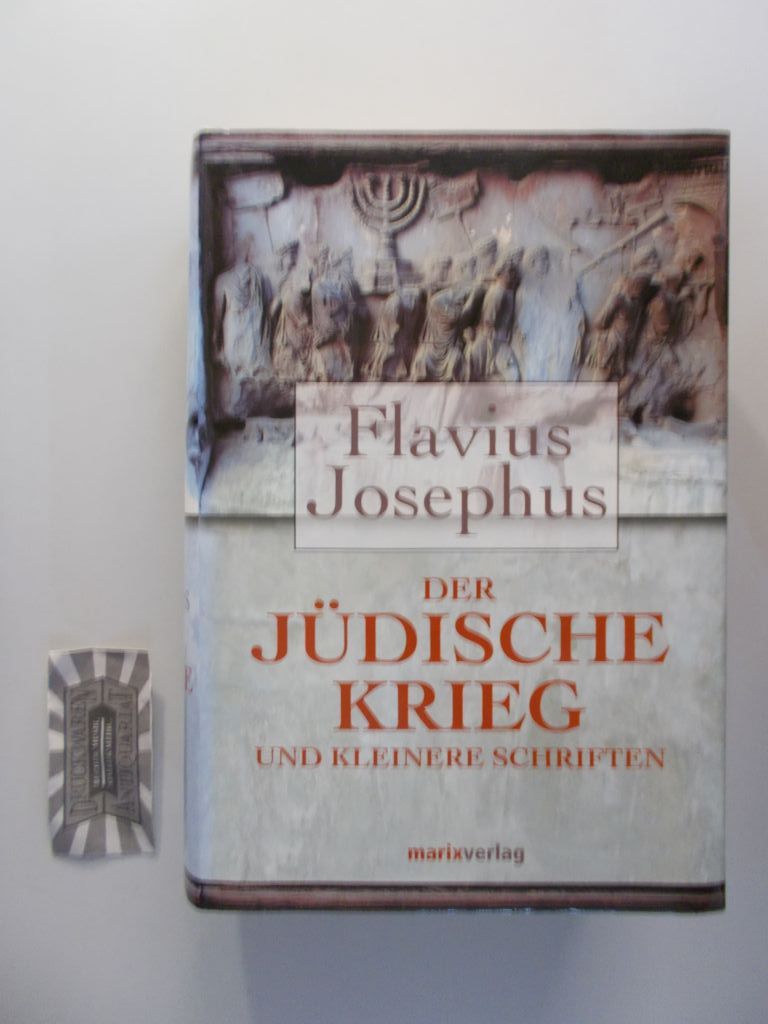 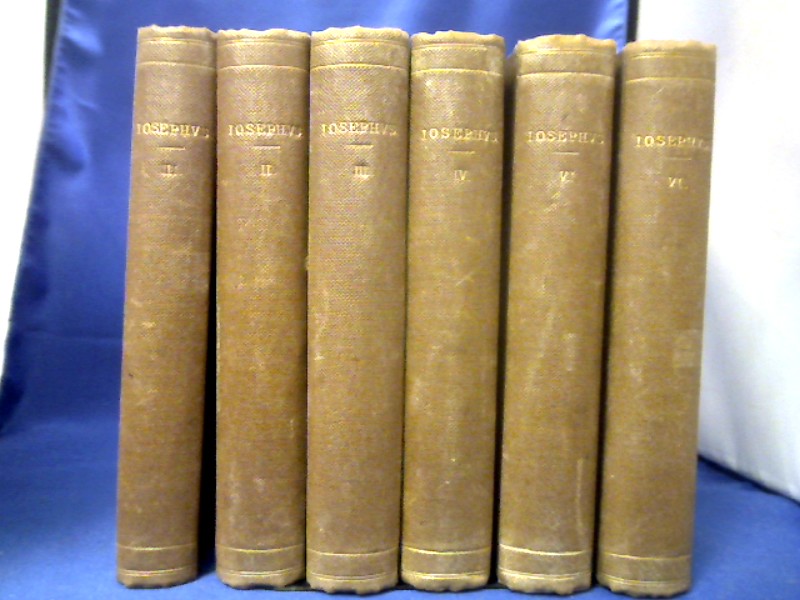 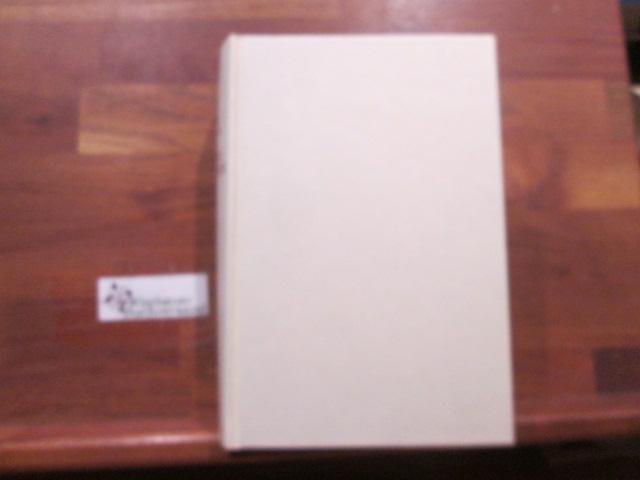