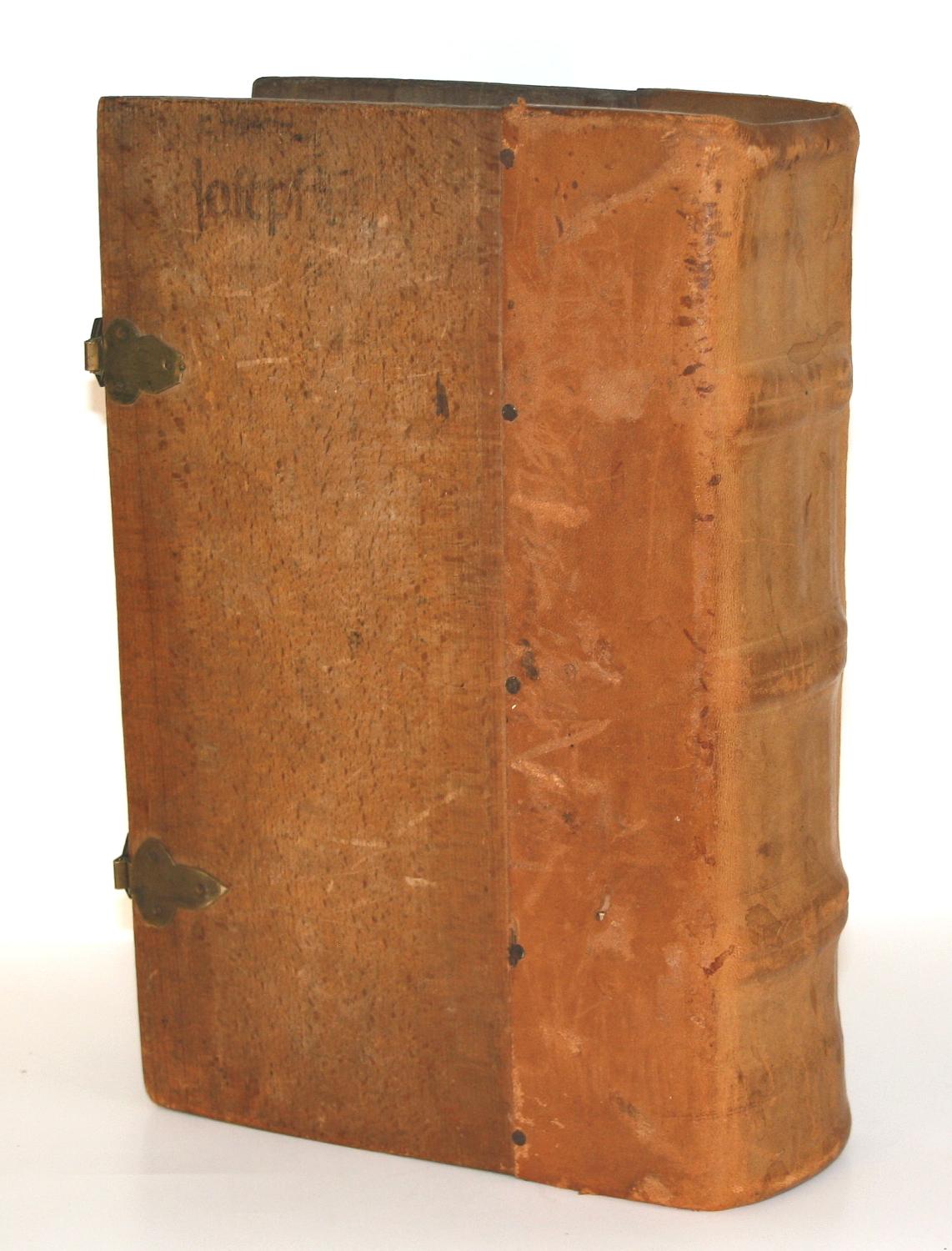 Venice, Reynaldus de Novimagio, 31 March 1481; 10 May '1400' [i.e. 1481] Folio [Binding 320 x 215 mm; Pages 302 x 210 mm]. 232, 120 leaves (including all blanks). Rubricated in red and blue. With extensive contemporary, handwritten annotations and an eight-page manuscript, comprising the missing passages of Contra Apionem. Bound in contemporary wooden boards, clasps and leather spine renewed. -------------------------------------------------- This is an important annotated copy of Josephus' edition from 1481. Its annotator, an impressive Humanist scholar, first discovered two lenghty passages in Contra Apionem, missing from the text in all early Josephus' editions. It was not before 1534 that Sigismund Gelenius edited a complete version at Froben in Basel. ------------------------------------ Although five editions of the ancient Latin translation of one or two of Josephus works appeared before it (the Greek editio princeps was not published until 1544), the 1481 Venice edition was of particular importance. First, it was the earliest edition to include together all three works of Josephus for which there was a Latin translation produced in antiquity (the first Latin translation of Josephus fourth work, his autobiography, was not made until the early modern period). Second, the Latin text of this edition (which depended on the 1470 Augsburg edition for the Antiquities and the 1480 Verona edition for the Jewish War and Ageainst Apion) had a tremendous impact on the next ten editions. Six of these offered only a slightly revised version of the text in the 1481 edition and the other four used its text substantially, together which one or two other sources. (see Levenson and Martin) The volume offered for sale here is of particular interest because it contains a large number of annotations in a late fifteenth- or early sixteenth-century hand, especially abundant for the Jewish War and the Against Apion. Among them are a large number of notations in the margins and in the text itself of variant readings, which are based on manuscripts rather than printed editions. Most remarkably, there is an eight-page manuscript appended to the end of the work, written in at least two different hands, one of which appears to be in the hand of the annotator of the edition. This manuscript consists of two lengthy passages (Contra Apionem, Book 1, sections 272-318, and Book 2, sections.4-37) missing from the text of the Against Apion in the 1481 edition and thus from the other earlier editions dependent on it. These passages were missing because the 1480 Verona edition, used by the 1481 Venice edition, was based on a branch of the manuscript tradition that lacked these passages. The manuscript appended to this copy supplied the missing passages from one of the manuscripts (several of which are known today) that had the complete text of the Ancient Latin translation. The first printed edition that includes the missing sections is the 1534 Basel edition, edited by Sigismund Gelenius, who appears to have made his own modern Latin translation of the passages from Greek manuscripts he had recently acquired. ------------------------------------ It is possible that this eight-page manuscript might be of importance because it contains evidence of readings not found elsewhere in the manuscript tradition of the Contra Apionem. This is by no means certain, however, because there is already a good critical edition of this text published by Boysen in 1898. Much more important and of unquestionable value is the fact that the copious annotations provide a magnificent window into the intellectual world of an impressive Humanist scholar, whose specific interest and perhaps even identity might be revealed by a careful analysis of the abundant evidence found throughout this book. ------------------------------------------ Acknowledgements: We are deeply grateful for the substantial help of David Levenson in describing the present copy. ------------------------------------------------------ Bibliography: GKW M15175; ISTC ij00485000; Goff J-485; Polain 2333; BMC V:256; BSB-Ink I-617; David Levenson and Thomas Martin - The Place of the Early Printed Editions of Josephus' Antiquities and War (14701534) in the Latin Textual Tradition. (in: Sibyls, Scriptures, and Scrolls: John Collins at Seventy, edited by J. Baden, Hindy Najman, and Eibert Tigchelaar [Leiden: Brill, 2017], 765-825) la Gewicht in Gramm: 550. Artikel-Nr.: 169992.

Folio (339 x 224 mm), in 2 parts. Handsomely bound in early 18th-century English mid-brown morocco, spine divided in seven compartments by raised bands, brown lettering-piece in second, others richly gilt with gilt scroll centre and scroll corner tools, sides with two panels of floral rolls, lozenge shaped floral tool at corners, ruled with a two-line fillet, decorative roll to edges and turn-ins, comb-marbled endpapers. Opening 10-line initial space completed in contemporary blue penwork, other capital spaces in first part in red. Some early marginalia. The Chatsworth copy, with engraved library label. Spine somewhat darkened, inoffensively so, slight rubbing to joints, very pale damp-mark in lower margin, overall a superb copy of a beautifully printed book, the paper generally clean and strong, with good wide margins. Woodcut initials. Roman type (Proctor 13566). The colophon following the CA has the date 1513; he colophon following the AJ has the date 10 January 1514. First edition of Josephus' works to add the complementary work of pseudo-Hegesippus, handsomely printed in clear Roman type for the noted Renaissance scholar and professor at Milan, Alexander Minutianus, a zealous proponent of Latin literature. It also includes a ninth-century compilation based primarily on pseudo-Hegesippus, and a list of concordances between pseudo-Hegesippus and Josephus. In other respects it follows the text of the 1499 Venice edition. At least 24 Latin editions of Josephus were published between 1470 and 1540. The Greek editio princeps was not published until 1544. Artikel-Nr.: 138817.