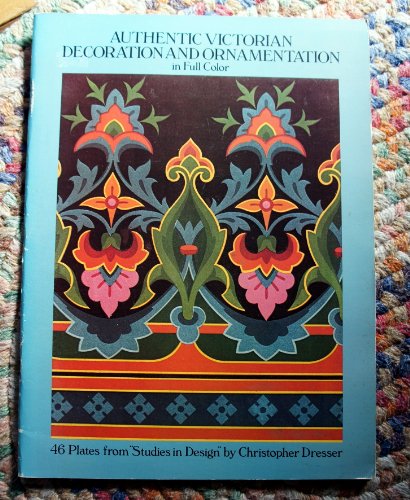 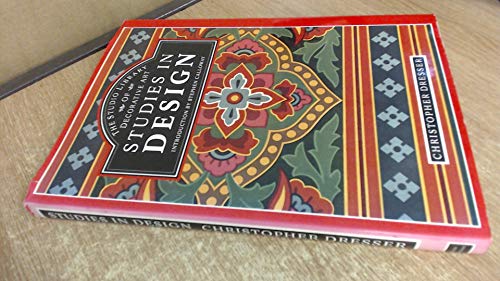 Studies in Design (The Studio library of decorative art)

Gut/Very good: Buch bzw. Schutzumschlag mit wenigen Gebrauchsspuren an Einband, Schutzumschlag oder Seiten. / Describes a book or dust jacket that does show some signs of wear on either the binding, dust jacket or pages. Artikel-Nr.: M01851701745-V. 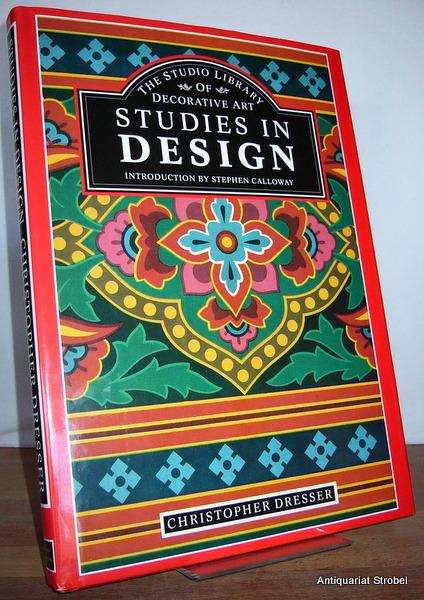 Studies in Design. Introduction by Stephen Calloway. (The Studio Library of Decorative Art). 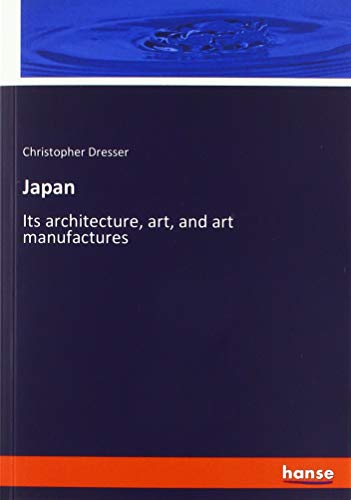 Taschenbuch. Druck auf Anfrage Neuware - Japan - Its architecture, art, and art manufactures is an unchanged, high-quality reprint of the original edition of 1882.Hans Elektronisches Buch is editor of the literature on different topic areas such as research and science, travel and expeditions, cooking and nutrition, medicine, and other genres. As a publisher we focus on the preservation of historical literature. Many works of historical writers and scientists are available today as antiques only. Hans Elektronisches Buch newly publishes these books and contributes to the preservation of literature which has become rare and historical knowledge for the future. 484 pp. Englisch. Neu. Artikel-Nr.: 9783337599591. 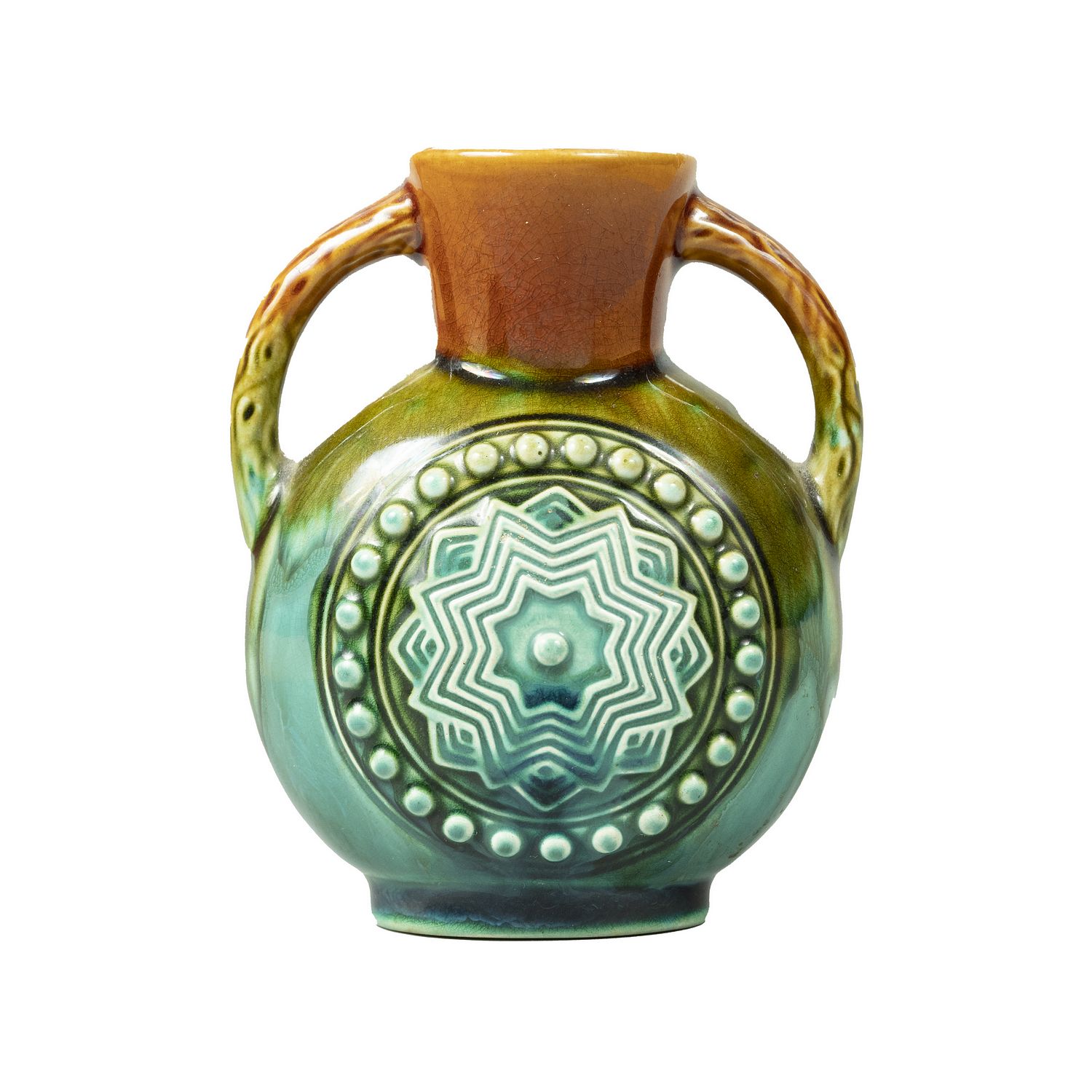 A small two-handled glazed earthenware vase (100x80mm) designed by Christopher Dresser and made by the Linthorpe Pottery. Green, blue and brown glaze with a floral Aztec design to each side. The base is marked "Linthorpe 944" and impressed with the "HT" monogram of Henry Tooth. In 1879, Christopher Dresser, with a businessman called John Harrison, founded a pottery at Linthorpe in Middlesbrough. Dresser's aim was, in part, social and philanthropic: to help relieve unemployment and poverty in a poor part of England. But Dresser was, by this stage in his career, one of the most inventive, radical and influential designers in Europe. At Linthorpe, he wanted to produce pottery unlike any that had been seen before. Dresser was the Art Superintendent from 1879-1882, responsible for all the designs. Even after leaving the pottery, he continued to submit designs. On Dresser's recommendation, Henry Tooth, an artist from Buckinghamshire, was appointed as pottery manager. Tooth also left in 1882 and his HT monogram dates Linthorpe work to the three years before then. Dresser's designs for Linthorpe incorporate the vast range influences he had absorbed up to that point: Egyptian, South American, Islamic, Japanese and Celtic. And much of his work reflects his early study of botany and natural history. Overlaying everything is a pronounced Arts and Crafts ethic and aesthetic. This beautiful little vase with its floral, Aztec design brings together many of the elements which make up Dresser's distinctive genius. Artikel-Nr.: 3444.

The Rudiments of Botany, Structural and Physiological: Being An Introduction to the Study of the Vegetable Kingdom, and Comprising the Advantages of a Full Glossary of Technical Terms.

Hardcover. First edition. 8vo. 230x153mm. pp. xxiii, [i] blank, 433. Original green cloth, ruled in blind, gilt lettered spine. The spine has, in the past, suffered a tear from the cloth on the upper cover. Now repaired, the former tear is still showing but the spine is firmly attached. A small tear to foot of spine and some rubbing to corners but overall the binding is in good condition. Internally, very good. A nice copy of a scarce and important book. Illustrated throughout with Dresser's studies of plants. Christopher Dresser (1834-1904) was a precociously talented designer. At thirteen, he attended the Government School of Design at Somerset House where he took a special interest in botanical design. Dresser contributed to Owen Jones's 1856 Grammar of Ornament and, the following year he wrote his first major work On the relation of science to ornamental art. 1859 saw the publication of both The Rudiments of Botany and Unity and Variety which resulted in the award of a doctorate from the University of Jena. Later, he was elected a Fellow of the Linnaean Society. This interest in and love of nature inspired his design work throughout his life, his central theory being that "natural forms should be abstracted and made geometric for use in ornamentation" (Rosemary Hill, ODNB). For Dresser, the designer's mind was like "the vital force of the plant ever developing itself into forms of beauty". Fine. Artikel-Nr.: 2107. 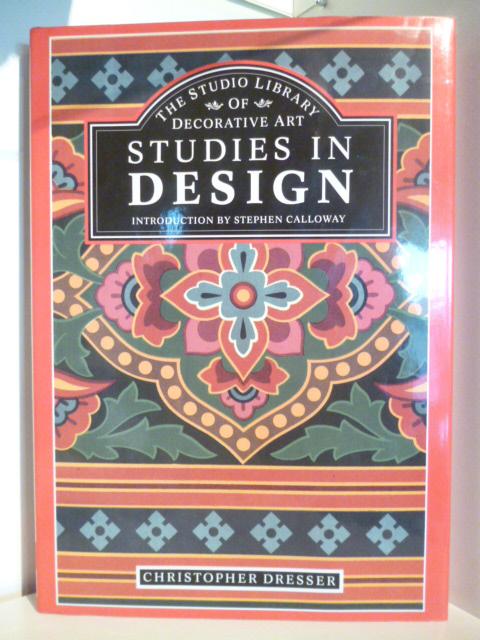 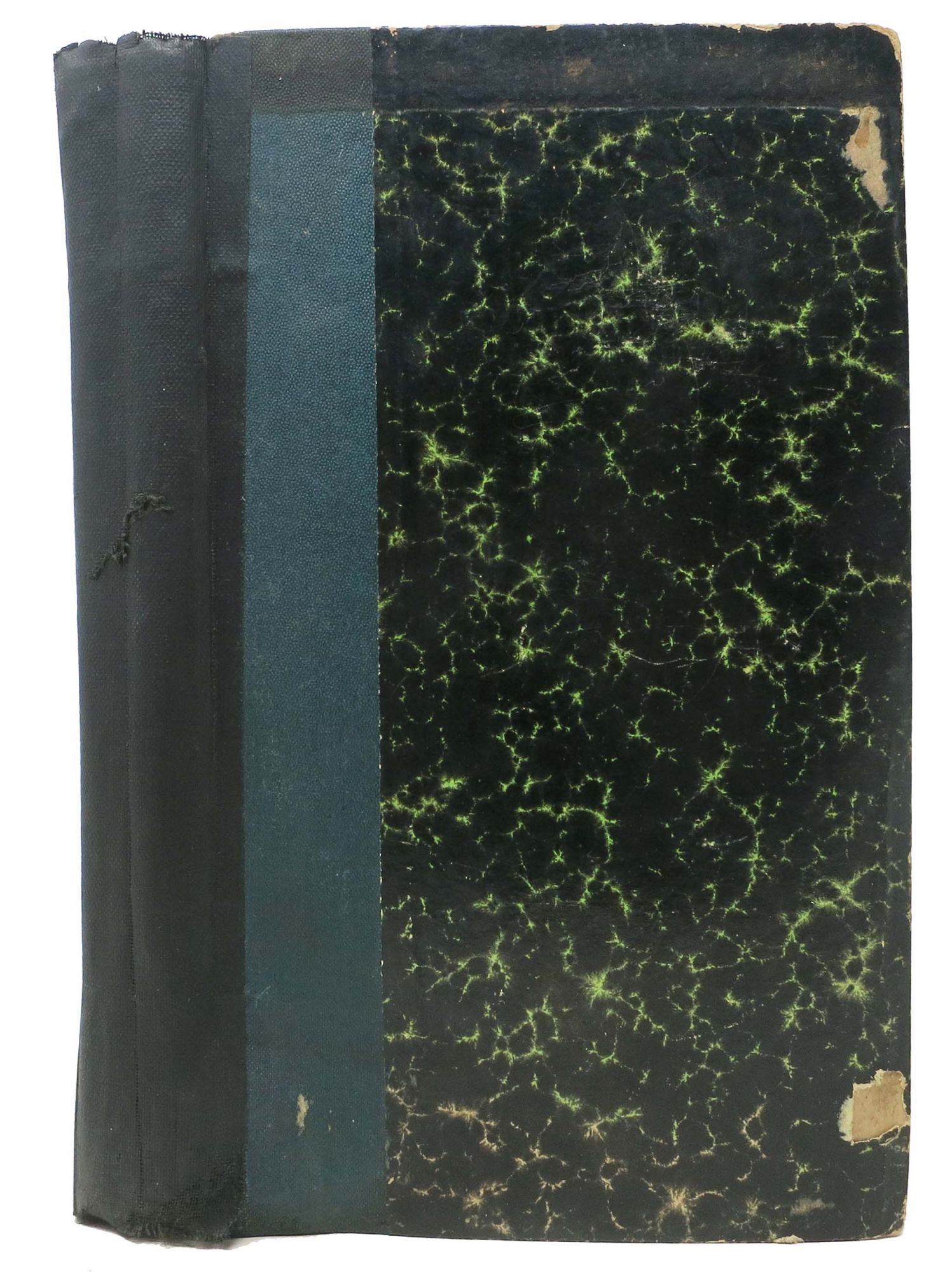 JOURNAL Of The PROCEEDINGS Of The LINNEAN SOCIETY. BOTANY. Vol. III.; [Bound with] Supplement to Botany - Vol. I - Containing Musci Indiæ Orientalis; An Enumeration of the Mosses of the East Indies. By William Mitten, Esq.; [and] Proceedings of the Linnean Society of London

iv, 214; [2], 171, [1 (blank)]; lxxii, [2 (blank)] pp. Couple illustrations, at least one lithograph by W[alter]. [Hood] Fitch (1817-1892). 8-3/4" x 5-1/4" Walter Fitch was a botanical illustrator from Scotland. Fitch's illustration have appeared in Curtis's Botanical Magazine, most publications issued by Royal Botanical Gardens Kew, George Bentham's 'Handbook of the British Flora', James Bateman's "A Monograph of Odontoglossum" and William Hooker's "A century of Orchidaceous Plants". "Fitch was made a fellow of the Linnean Society in 1857." [wiki].The previous owner inscription reads "Skipper Kent 1953". Skipper Kent was a restauranteur in the San Francisco Bay Area, owning Zombie Village in Oakland and Skipper Kent's in San Francisco. These "tiki" inspired restaurants were his pride and joy as he was already and avid collector of Polynesian art and artifacts. Kent was also an avid orchid collector, so we suspect this was in his library at one time, with his interest in botany.The embossed library stamp comes from the library of Herman Knoche (1870-1945). Knoche was born in San Jose, California and studied botany at Stanford University. He moved to France to further his studies at University of Montpellier; his particular interest was island vegetation. A VG copy. Boards and edges are rubbed/(scuffed), some tears to the paper wrapped boards, some soiling to boards and back strip, some fraying to back strip, blue ink inscription to ffep - possible previous signature, some soiling to end papers (particularly to fore-edge), embossed library stamp to head of title page, age toning to leaves, water damage to fore-edge of leaves and boards, water damage particularly bad at tail of boards and leaves -going towards middle of leaves, binding a bit tender, some gatherings are loose or torn, but still enact, overall internally clean and bright. Period binding, black ink stain to all edges. 1st Edition. Artikel-Nr.: 46469.