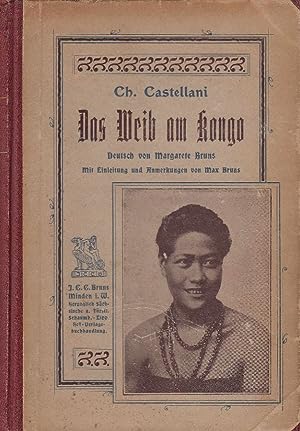 Buchbeschreibung J. C. C. Bruns ND [c.1910], Minden, 1910. RARE copy of the German translation of Charles Castellani's account of the life of women in Central Africa. Charles Castellani was a French writer and a painter who joined Jean-Baptiste Marchand's expedition to Congo and Sudan. Castellani took special interest in the lives and customs of the women native to this region. While a great deal of b&w photographs and sketches that accompany this book seem to be no more than pornography in ethnological guise, the book is nonetheless a faithful source to the effects of French imperialism on the indigenous populations of West Africa, of Marchand's expedition and to some of the customs of the various peoples it had encountered. The book was translated by the poet Max Bruns and his wife, who considered the nudity depicted in the book as conforming with their own ideals. XIV+195x135mm. 283 pages. Marbled quarter-cloth rebound Hardcover with gilt lettering on spine. Original softcover bound as whitepage. Cover worn, rubbed and bumped at several places. Cover edges worn, cover corners bumped and tattered. Spine rear hinge partly cracked. Spine edges worn and bumped. Binding slightly loose on inner cover. Ex-libris stamps throughout the book. Pages yellowing and slightly age-stained. [SUMMARY]: This rare account of turn-of-the-century Central Africa has sustained mild external damage (mostly to cover), but is still in good reading condition. The book is in : German. Artikel-Nr. MC 17 21