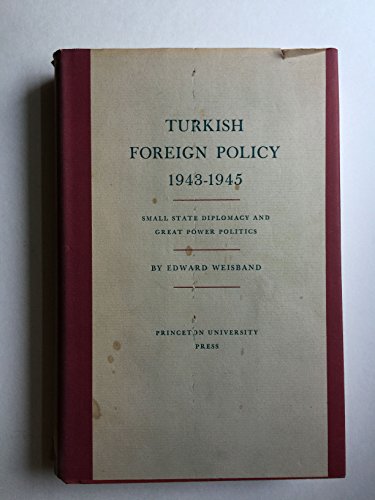 As it became evident that the Allies were winning World War II, Turkish policy-makers struggled to achieve their objectives in the shifting circumstances of wartime diplomacy. Edward Weisband's detailed description of Turkish foreign policy from 1943 to 1945 reveals that it was complicated by the fact that its two principal aims dictated contradictory positions. The first aim was the priority of peace over expansionism--this implied a noninterventionist policy. On the other hand, the belief that the Soviet Union represented the primary threat to the security of the Republic often made intervention to contain Russia seem necessary for national defense. Turkish officials became determined to influence the postwar settlement towards an equilibrium among the great powers that would limit Soviet expansionism, which the Turks assumed they could not do alone. Consequently, they were among the first to envision the contours of the Cold War.

After outlining the historical origins of the ideology that lay behind Turkish diplomacy, the first part of the book concentrates on the policy-making process in Ankara and assesses the relative influence of individual leaders and institutions. The second part analyzes both Turkey's responses to the exigencies of war and the general nature of small state diplomacy.

The Princeton Legacy Library uses the latest print-on-demand technology to again make available previously out-of-print books from the distinguished backlist of Princeton University Press. These paperback editions preserve the original texts of these important books while presenting them in durable paperback editions. The goal of the Princeton Legacy Library is to vastly increase access to the rich scholarly heritage found in the thousands of books published by Princeton University Press since its founding in 1905.