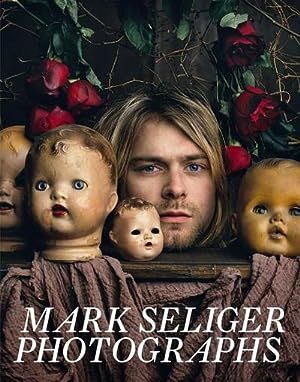 Neuware - Mark Seliger's photography has dominated magazine covers, feature articles, and media campaigns for decades. With signature compositions and painterly flair, he has built an incredible body of work with unforgettable portraits of the world's leading personalities in music, fashion, politics, business, and entertainment. This book showcases Seliger's best-known portraiture, as well as select standouts from his landscape and creative work. 240 pp. Englisch. Bestandsnummer des Verkäufers 9781419726613

Críticas: "He has spent 30 years deftly rendering some of the most elusive icons of popular culture. In a new retrospective book, Vanity Fair portraitist MARK SELIGER focuses in on his personal best" Vanity Fair "You might not know Mark Seliger's name, but you know his work: the celebrity portraitist largely defined the images seen on Rolling Stone from 1992 to 2007 - celebrities in this volume include Kurt Cobain, Nelson Mandela, Leonardo DiCaprio, Barack Obama, Jerry Seinfeld, and Jay-Z, but it also includes some never-seen personal documentary work." New York Magazine online "Mark Seliger is one of the most sought-after photographers in the world. He began working for Rolling Stone in 1987 and spent nine years as the magazine's chief photographer, taking more than 100 iconic cover shots. His distinctive images now regularly appear in Vanity Fair, GQ and Vogue . . . His new book showcases his most celebrated pictures..." Daily Mail "MARK Seliger takes photographs for a living. He has been doing it for some 30 years now. And given that most of his work appears in magazines such as Rolling Stone, Vanity Fair and GQ there's a good chance that you will recognise the people whose pictures he takes. On the cover of his new book, modestly entitled Photographs, you can see the late Kurt Cobain on the front and Barack Obama (shot from behind) on the back. In other words, we're talking celebrity with a capital C. And so in the pages of Photographs everyone turns up, from Chuck Berry to Kendrick Lamar, from Charlize Theron to Kim Kardashian . . . His access is amazing. He can persuade Drew Barrymore to undress for a tasteful recreation of Belle Epoque erotica, or get Lenny Kravitz to show off his piercings (yes, all his piercings). And then he can take a picture of Pakistani activist Malala Yousafzai sitting at a table looking down the lens which will take your breath away. What's that called. Talent, I guess." Sunday Herald "Mark Seliger has been shooting portraits of the world's most famous people for over three decades. In the realm of portrait photography Mark Seliger is a superstar . . " Amateur Photographer "Published to mark the 30th anniversary of his career, US photographer Mark Seliger's Photographs is a portfolio celebrating the legends that he has trained his lens on. Ranging from mega-selling pop stars to US presidents, Seliger's shots are a masterclass in versatility, showcasing how a skilled lensman is capable of capturing a great picture in both a war zone and an awards ceremony - his work veers from gritty reportage to the iconic images that have graced the covers of magazines such as Rolling Stone, Vogue, US and Vanity Fair. . . . Beautifully put together in an oversized format, Mark Seliger Photographs gathers three decades of legendary figures from the worlds of politics, film, comedy and fashion. However, it is his portraits of music icons that have been revered during Rolling Stone's recent 50th anniversary celebrations, on which Seliger truly excels." Classic Pop Magazine