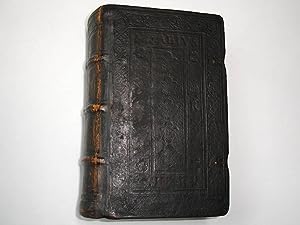 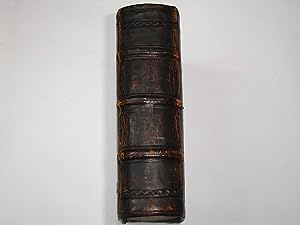 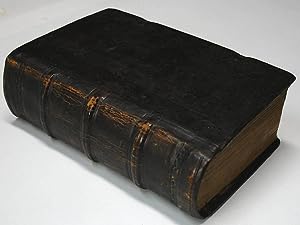 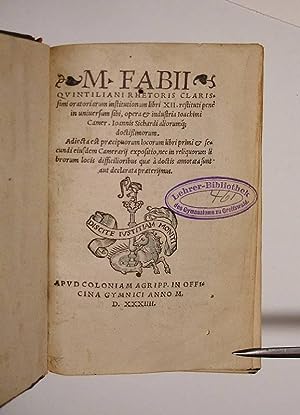 8vo. Ad 1: (XVI),783,(1 blank) p. Ad 2: (79),(1 blank) p. 16th century calf over wooden boards. 17 cm Two works on rhetoric (Ref: Ad 1: VD16 Q 93; Schweiger 2,843; cf. Fabricius/Ernesti 2,271; Graesse 5,528/29; cf. Ebert 18448. Ad 2: Not in VD16!, we nevertheless traced a few German copies in KVK) (Details: Back, with three raised bands, expertly repaired in antique style. Boards decorated with 2 rows of blind-stamped rolls, the first one with portraits, the second with floral motives. Ad 1: Woodcut printer's mark on the title, it depicts a scepter, on which a stork is resting; a hippocampus coiles around the base. Halfway the scepter hangs the motto: Discite iustitiam moniti, i.e Be warned, learn ye to be just' (and not to slight the gods). (Vergil, Aeneid 6,620, Loeb translation) At the beginning of each of the 12 books a woodcut initial. Ad. 2: Title with woodcut arabesque borders. Woodcut initials) (Condition: Boards chafed, portraits worn away. Some wear to the joints. Clasps and catches gone. Oval stamp on the first title; Ownership entry on the front pastedown. Three small worm holes in first three gatherings, one of them continuing up to p. 350) (Note: Ad 1: The Roman orator Marcus Fabius Quintilianus, ca. 35 - ca. 100 A.D., was under emperor Vespasian probably the first holder of the chair of Latin rhetoric in Rome paid by the fiscus (salarium e fisco accepit, Suetonius, Vesp. 17-19). His most celebrated work is the 'Institutio Oratoriae', in 12 books. It 'covers the complete training of the orator from the earliest preparation by the grammarian to his most mature aspirations for oratorical preeminence'. (The Classical Tradition, Cambr. Mass., 2010, p. 827) The ideal was a public speaker who was skilled not only in eloquence, but who was also a good man. This is summarized in the famous maxim that an orator is a 'vir bonus dicendi peritus'. Quintilian still makes all that has been written on education from Rousseau to the latest pseudo-psychologist rather worthless. (H.J. Rose, A handbook of Latin literature, London, 1967, p. 399) 'Book 1 discusses childhood education. (.) In book 2 the boy enters the school of rhetoric'. In book 3 follows an account of the art of rhetoric, 'its origin, its parts, and its functions. Book 4-6 deal with the detailed structure of a speech, (.) Book 7 is concerned with arrangement (dispositio) and status-lore. Book 8 discusses style (.) while in book 9 figures of thought and speech are illustrated'. Book 10 contains a critique of Greek and Latin writers. 'Book 11 discusses memory, delivery, gesture and dress(.) The concluding book shows the complete Orator in action, a man of highest character and ideals, (.). Roman gravitas at its noblest'. (OCD 2nd ed., p. 907) ¦ The 'Institutio Oratoria' of Quintilian was known throughout the Middle Ages, especially in the summarizing works of the encyclopedists like Cassiodorus and Isidorus of Sevilla. In 1416 the Italian humanist Poggio Bracciolini discovered in Sankt Gallen a complete text, after which Quintilian came 'to exert a deep and lasting influence on rhetorical theory and practice'. (The Classical Tradition, p. 829) The treatise influenced authors like Erasmus and Vives. The humanist Poliziano lectured on him, and Lorenzo Valla preferred him to Cicero. His educational ideas were absorbed by Piccolomini, Agricola, Erasmus (De pueris instituendis), and Melanchthon. He was also used by Ben Jonson (Discoveries), Alexander Pope (Essay on criticism), Du Bos, and Goethe. 'Seine Wirkung geht mit der Verfehmung der Rhetorik im 19. Jh. zur³ck, doch bleibt Quintilian eine respektierte Gr÷sse bis heute'. (Neue Pauly, 10,719) ¦ The German classical scholar Joachim Camerarius was born in 1500 in Bamberg. He died in Leipzig in 1574. He held classical professorships at N³rnberg, T³bingen and Leipzig, and was one of the most significant representatives of Renaissance humanism in the Reformation. His interests were diverse and his productivity spectacular. '. Bestandsnummer des Verkõufers 120314