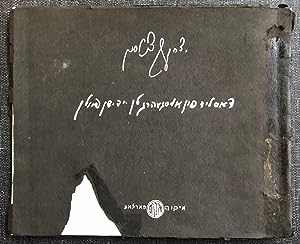 (FT) Original Wrappers. 12mo. 79 pages. 17 cm. Undated edition. In Yiddish. "Song of the Murdered Jewish People" by Itzhak Katzenelson (1885 1944) , a Hebrew and Yiddish poet. "Katzenelson s world fell apart when in August 1942 his wife Hanna and two younger sons, Ben-Tsiyon and Binyamin, were deported to Treblinka. From then on, his literary creativity was piercingly shaped by lamentations over the loss of his family. Nonetheless, with his oldest son, Tsevi, he found the strength to join the Jewish Fighting Organization and took part in the first uprising of January 1943. After the ghetto was destroyed in April and May 1943, he escaped to the Aryan section of Warsaw and obtained a Honduran identity document. Nevertheless, he was sent to a German detention camp for foreign subjects in Vittel, France. He was imprisoned there until April 1944, and devoted most of his time to writing. Two important works were produced during that period: Pinkas Vitel (The Vittel Diary) , a Hebrew composition that uses the language of an incensed diarist and reconstructs the days of terror in Warsaw during the mass deportations; and Dos lid fun oysgehargetn yidishn folk (The Poem about the Murdered Jewish People) , a pathos-filled Yiddish poem that laments the destruction of the Jewish people and of the poet himself, who has been become bitterly angry with humankind and God. These two works are among the boldest and most lofty literary expressions to emerge from the Holocaust. All of Katzenelson s works from his Vittel period were either buried in hiding places or were given to people he trusted; consequently, they were saved and published shortly after the end of the war. In the middle of April 1944, Katzenelson and his son Tsevi were sent to the Drancy transit camp, and from there one month later to Auschwitz, where they were murdered. In 1950, the Ghetto Fighters kibbutz built a museum and an institute for research about the Holocaust that bear Yits? Ak Katzenelson s name. " (YIVO Encyclopedia) Subjects: Holocaust, Jewish (1939-1945) -- Poetry. Half Dollar size chip to cover, no text loss, institutional stamp on title page, taped spine, otherwise Good Condition. (HOLO2-97-33xx) holo9, wiv0512,yid1, ee2. (ja). Bestandsnummer des Verkäufers 29513

Dan Wyman Books is the largest Jewish Antiquarian bookstore in New York, and a leading dealer worldwide. Please stop by when you are in town. Open by appointment most days, but closed on Jewish Holidays. Please visit our homepage at www.DanWymanBooks.com Please contact us with your needs or if you have books to sell. We consistently out-bid our competitors and we make housecalls to buy books!


Receive free of charge our monthly book list of unusual out-of-print Jewish,
titles in your e-mail box--days before they are posted on line. E-mail us for
details (no purchase necessary).

All titles are 100% returnable for any reason. U.S. Shipping is free. We accept
payment by check or major credit card (MC/VISA, AMEX, Discover), PayPal or Cash.
Please call or e-mail to hold an item. We reciprocate standard trade terms.


Shipping costs are based on books weighing 2.2 LB, or 1 KG. If your book order is heavy or oversized, we may contact you to let you know extra shipping is required.