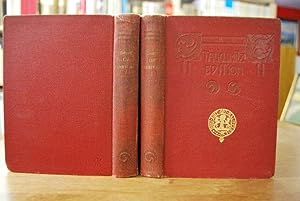 The Christian. A Story.

344, 348 S. Einband berieben, angeschmutzt und bestoßen. In Bd. 1 bis etwa S. 27 Bleistiftmarginalien. Gutes Leseexemplar. Text in englischer Sprache. "Sir Thomas Henry Hall Caine CH, KBE (14 May 1853 31 August 1931), usually known as Hall Caine, was a Manx author. He is best known as a novelist and playwright of the late Victorian and the Edwardian eras. In his time, he was exceedingly popular, and, at the peak of his success, his novels outsold those of his contemporaries. Many of his novels were also made into films. His novels were primarily romances, involving love triangles, but also addressed some of the more serious political and social issues of the day. Caine acted as secretary to Dante Gabriel Rossetti and at one time he aspired to become a man of letters. To this end he published a number of serious works, but these had little success. He was a lover of the Isle of Man and Manx culture, and purchased a large house, Greeba Castle, on the Island. For a time he was a Member of the House of Keys, but he declined to become more deeply involved in Manx politics. A man of striking appearance, he travelled widely and used his travels to provide the settings for some of his novels to good effect. He came into contact with, and was influenced by, many of the leading personalities of the day, particularly those of a socialist leaning. Caine`s novels are considered outdated by creators of English literature curricula today, and despite his immense popularity during his life, he is now virtually unknown or forgotten. However, some of his more popular novels have been published as paperbacks in recent years, predominantly for the Manx market catering for tourists to the Isle of Man." (Wikipedia) Sprache: Deutsch Gewicht in Gramm: 550 16 x 12 cm, Leinen ohne Schutzumschlag. Buchnummer des Verkäufers 14053

Titel: The Christian. A Story.