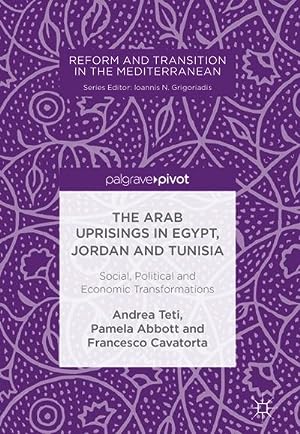 The Arab Uprisings in Egypt, Jordan and Tunisia : Social, Political and Economic Transformations

Neuware - The Arab Uprisings were unexpected events of rare intensity in Middle Eastern history - mass, popular and largely non-violent revolts which threatened and in some cases toppled apparently stable autocracies. This volume provides in-depth analyses of how people perceived the socio-economic and political transformations in three case studies epitomising different post-Uprising trajectories - Tunisia, Jordan and Egypt - and drawing on survey data to explore ordinary citizens' perceptions of politics, security, the economy, gender, corruption, and trust. The findings suggest the causes of protest in 2010-2011 were not just political marginalisation and regime repression, but also denial of socio-economic rights and regimes failure to provide social justice. Data also shows these issues remain unresolved, and that populations have little confidence governments will deliver, leaving post-Uprisings regimes neither strong nor stable, but fierce and brittle. This analysis has direct implications both for policy and for scholarship on transformations, democratization, authoritarian resilience and 'hybrid regimes'. 142 pp. Englisch. Buchnummer des Verkõufers 9783319690438

Titel: The Arab Uprisings in Egypt, Jordan and ...

“This volume demonstrates that the supposedly durable autocratic regimes described in the scholarly literature are in fact highly precarious. Even as many analyses treat the Uprisings as “over,” the conditions that led to the Uprisings―the frustration of ordinary citizens, elite corruption, and the dearth of economic opportunities―remain unchanged and, in many places, even worsened.  Combining survey material with informed case studies, this volume not only calls into question the emerging conventional wisdom about the failures of the uprisings in all but Tunisia, it raises challenging questions about the very meaning of democracy and the ways democracy promotion projects are advanced across the region. This is a must-read both for scholars concerned with the politics of the Middle East and the uprisings, and for policy makers and development agencies aiming to advance democratic politics in the region and elsewhere.” (Professor Jillian Schwedler, City University of New York, USA)

“With its mastery of relevant theoretical and conceptual debates and rigorously interrogated survey data, this book offers a nuanced and original analysis of the 2011 Arab Uprisings and their potential to politically transform the region.” (Professor Emma Murphy, Durham University, UK)

“This book provides important -- and surprising -- insights into the attitudes of Arab citizens following the uprisings.  It provides a deeper understanding of the different trajectories the uprisings and of the challenges confronting the region.  A valuable source for the classroom and for researchers.” (Professor Janine Clark, Guelph University, Canada)

“For decades, democratization scholars explained away the Middle East’s lack of democratization by falling back on culturalist arguments. The Uprisings challenged such misconceptions, their iconic peaceful mass protests resonating across the world in demanding ‘bread, freedom, and social justice’. Despite this, the lack of lasting change has again often been put down to ‘culture’. Teti, Abbott, and Cavatorta use data to challenge and enrich what we think we know, and in so doing provide a long overdue correction which avoids exceptionalist temptations. Their analysis draws on qualitative and quantitative research immersed in in-depth understanding of specific cases. By helping explain the Uprisings and revealing the limitations of current theories, the authors make a substantial contribution to the study of the Uprisings. Carefully written, conceived, and executed, this book will have staying power. It should be required reading for anyone wanting to understand the continuing historical process unfolding in the region.”(Professor Josh Stacher, Kent State University, USA)

We ship your order normally 24 - 48 hours after your order. The invoice including VAT is added to your shipment.