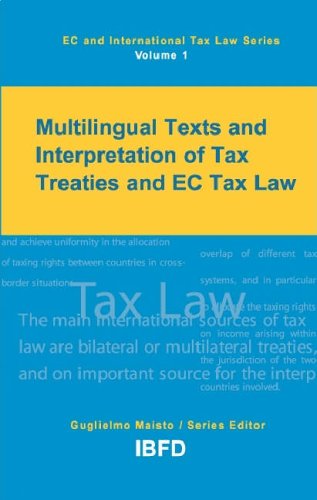 Linguistic issues and multilingual texts In the 19th century - when tax treaties did not exist -international agreements were generally concluded in one language only. For instance, a review of the 46 (obviously non-tax) international agreements signed by the Kingdom of Italy during the period 1861-1865 shows that most of the treaties (32) were concluded in the French language and that only a minority (14) were concluded in the Italian language (or in Italian and a second language, which was sometimes alien to the other contracting State).1 The practice of concluding international agreements in two or more authentic languages became frequent in the early part of the 20th century and this development influenced the drafting of tax treaties, which States commenced systematically to conclude as from the second decade of the century.2 Since then, tax treaties have usually been drafted in the(authentic) languages of the contracting States.3 In the absence of two or more (authentic) languages, jurists may nevertheless face linguistic issues; under internal law these primarily arise in private international law and comparative law, and generally feature in laws expressed in (only) one language that is alien to the State in which their application is sought. In the (tax) treaty context, linguistic issues primarily arise when there is (only) one authentic language, which is alien to one or both contracting States. Even if this practice is not common, in recent years, a few States began to conclude tax treaties in only one language. For example, Belgium, Israel and Norway concluded several tax treaties only in English, and most of the time such language is the authentic language of none of the contracting States.4 Exceptionally, linguistic issues may also arise when the authentic language belongs to both contracting States. A good example is represented by the translation prepared by the German tax authorities of the OECD Model Convention5 and Commentaries. In this respect, the Austrian Ministry of Finance indicated its disagreement to 26 terms and expressions contained in the translation and stated its intention to use different expressions in the "Austrian- German" authentic versions of bilateral treaties reflecting the OECD MC. The courts of several States have focused on linguistic issues in the presence of only one language. Examples may be found in the Canadian case of Gladden Estate,6 in which the Federal Court of Canada compared the expression "sale or exchange" used in the capital gains article of the former Canada-US treaty with the term "disposition" as used under internal law (the issue was whether a deemed disposition on death was covered by the "sale or exchange" exemption under the treaty), and in the Australian decision of McDermott Industries (Aust) Pty Ltd v. Commissioner of Taxation,7 in which the Federal Court of Australia interpreted the meaning of the term "use" as laid down in the Australia-Singapore tax treaty.8 1 See Raccolta dei Trattati e delle Convenzioni Conchiuse fra il Regno d'Italia ed i Governi Esteri, Turin: Paravia, 1865. 2 Compare Italy-Germany (1925), Italy-Czechoslovakia (1924), Italy-Hungary (1925), Danzig-Poland (1929), Italy-Spain (1927), France-Germany (1934) and Germany-Sweden (1928). 3 See M. Chretien, "L'interpretation des traites bilateraux sur la double imposition: methods et procedures" in Droit fiscal 1960, at 13, who also refers to the French practice until such period. 4 Such practice is also known in Italy. For example, the Italy-Greece treaty for the avoidance of inheritance and gift taxes (1964) was approved and published in the Italian Official Gazette only in French. See Chapter 12, at 12.3.2. 5 Hereinafter "OECD MC". 6 Federal Court of Canada, 25 March 1985. 7 Federal Court of Australia, McDermott Industries (Aust) Pty Ltd v.

This book offers an examination of linguistic issues arising in bilateral income tax conventions. The examination covers tax treaty policies of each country on multilingualism and administrative practice and case law on the issues raised by translation of treaties in more than one official language. Use of legal concepts is also covered in the country surveys, including the use of legal concepts that do not exist in the legal system of one of the two contracting states and the way such concepts should be interpreted in such state (e.g. trust). The subject also includes the use of concepts in one state that are similar but not identical to a treaty concept in the other state (e.g. droit d'auteur vs copyright).