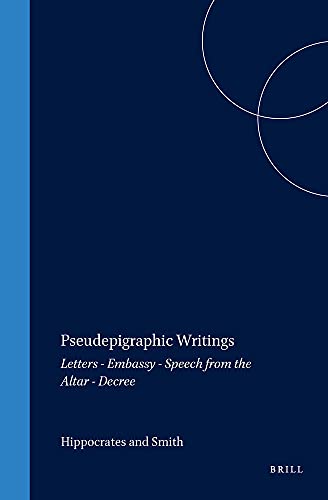 'This volume make(s) the Hippocratic biographical tradition more accessible through interpretations, translations and editions.' Robert B. Todd, Journal of the History of Medicine, 1994. 'Wesley Smith's recent edition of this material with a facing translation - the first ever in English - and a valuable introduction answers the need of placing those texts in their proper historical perspective.' Chloe Balla, Archives Internationales d'Histoire des Sciences, 1994. 'Wesley Smith has placed students of Greek medicine in his debt for making [Hippocrates' writings] available, for the first time in a single volume, to both the scholar and the Greekless reader.' Gary B. Ferngren, Ancient Philosophy, 1994.

The biography and personality of the "Father of Medicine" were known to the world through these important, but little studied letters and speeches. W.D. Smith here presents them newly edited from the most important manuscripts, with a facing English translation, and offers an introduction that gives a literary analysis and places them in relation to ancient history and ancient medical science. The speeches appear to be early (III B.C.) propaganda for the Island Cos, whose presence in the Library at Alexandria contributed to the characterization of the Hippocratic Corpus, while the Democritus Letters belong to the Roman period, after the firm establishment of Hippocrates' reputation.