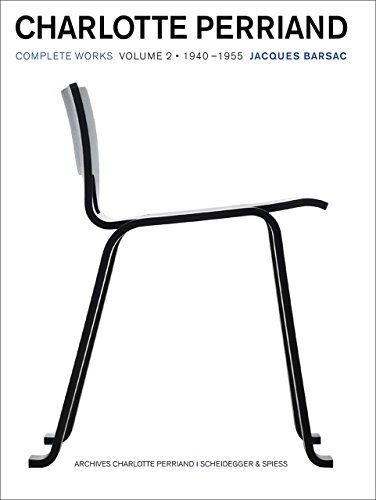 The fact that she was often overshadowed by her male contemporaries appeared not to affect her; her enthusiasm for the craft and her eagerness to develop her ideas and challenge her practice eclipsed her need for recognition. Now, though, with the publication of the third volume(of four) of Jacques Barsacs monumental monograph charting Perriand s life and times, one of the most prolific, innovative designers of the 20th century is getting the attention she truly deserves. --Design Archives

Charlotte Perriand (1903-99) is undoubtedly one of the most significant figures in 20th-century interior design. She was one of the pioneers in introducing the metal tube as building material for furniture, paving the way for machine age aesthetic in interiors in the 1920s and 1930s. Together with Le Corbusier and Pierre Jeanneret she created a number of iconic classics, such as the chaise-longue LC4, the armchair LC2, or the sling chair LC1. This second part of the new three-volume monograph on Perriand covers the period 1940-55 with her extensive stays in Japan 1942-42 and 1953-55, and with her designs for the reconstruction in France after WW II. It also investigates extensively her collaboration with Jean Prouve 1952-55. Moreover, the new volume looks at her work together with with Jeanneret and again also Le Corbusier during the 1950s, and it documents Perriand's involvement and role in founding the Useful Forms movement in 1949. The book features again an abundance of images and documents, mostly in colour and many of them previously unpublished. Charlotte Perriand: Complete Works is the authoritative source on this key figure of 20th-century interior design for scholars, dealers, and collectors. Each of the three lavishly illustrated volumes is completed by annotations, index, and bibliography.