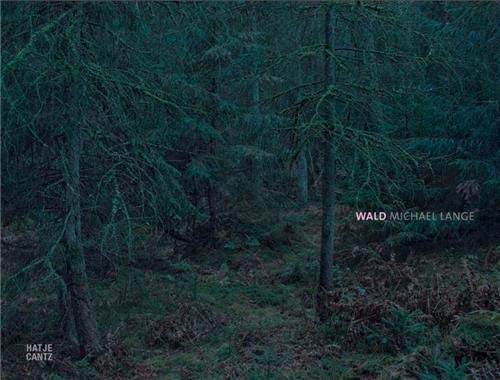 Germans have long had a long and deep fascination for the forest. Thus it would only seem natural (Germans might prefer the word "logical") that a photographer would venture to photograph in the woods. As you can easily guess from the title, this is what you get in Michael Lange's Wald. Just like any primordial (or seemingly primordial) environment, the forest combines the sublime with the terrifying. Visiting it, being subjected to it, entering it makes you realize that you just went to a place at the edge of the world as you know it, and any wrong step will take you away. You don't fully understand what that "away" might be, but you sense that it would probably not just end your life, it would annihilate you, it would swallow you whole, leaving absolutely nothing behind - not a sound, no bones, no remnants of clothes, just absolutely nothing. This feeling is as exhilarating as it is absolutely terrifying: You'd leave this world without a trace. How do you photograph this? How can you photograph this? You don't. You can't. All you can hope for, I think, is to point your camera into some direction, make good pictures, and then hope for the best. Hope that people will find a bit of that excitement and terror when looking at the photographs. Which is, mind you, a pretty tough task. Lange has done this very well.--Joerg Colberg "Conscientious Photography Magazine "

The forest is the setting for myths and fairy tales and has been a favorite subject in art and literature from time immemorial. Over a period of three years, Michael Lange (*1953 in Heidelberg) wandered through Germany’s vast deciduous and coniferous forests, taking pictures with a sure sense of the places where childhood memories and sober documentations of nature blur. The mysterious photographs were taken off the beaten path, in the thickets and underbrush, at dusk or twilight. What was decisive for the cycle was the question of how the nature of stillness can be depicted in an image. The finest of nuances, shadows, and color gradients create thickly atmospheric compositions of concentrated clarity, conveying an experience characterized by the German Romantic word Waldeinsamkeit (woodland solitude). This publication traces the artist’s photographic tracks. Exhibition schedule: Umweltfotofestival Horizonte, Zingst, May 26–June 3, 2012 | Alfred Ehrhardt Stiftung, Berlin, opening October 2012 | Robert Morat Galerie, Hamburg, 2013