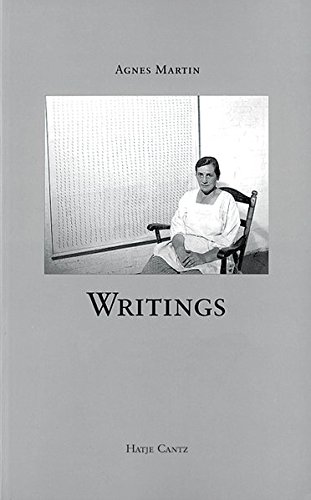 A collection of lectures and discourses on beauty, inspiration, humility, and the life and mind of the artist. One may be put off by her unpretentious but near-mystical blend of Zen ideas, classicism, and connection to nature. I find the circular declarations poetic, transcendent, and essential.--An-My L "Aperture Magazine "

Agnes Martin's abstract works adhere to no set of rules but appear instead as contemplative, intuitive signs. Her "floating abstractions," in which lines and free bands of color emerge almost imperceptibly, can be reproduced only with difficulty. Her writings, on the other hand--although certainly not intended as programmatic statements--offer valuable clarity regarding her own works and poetic insight about art in general. Since its original publication in 1991, this volume of Martin's writings has been a fundamental document for libraries of artists, collectors and critics. Rather than identifying herself with her Minimalist peers, Martin has aligned herself with the ancient Greeks, Egyptians and Chinese, asserting that "the function of art work is... the renewal of memories of moments of perfection." In combination with illustrations of her works, these texts--including lectures, stories recorded by critic Ann Wilson, passages ostensibly arranged in associative sequences and "fragmentary ideas"--form an eloquent artist's statement by the creator of "silent paintings."