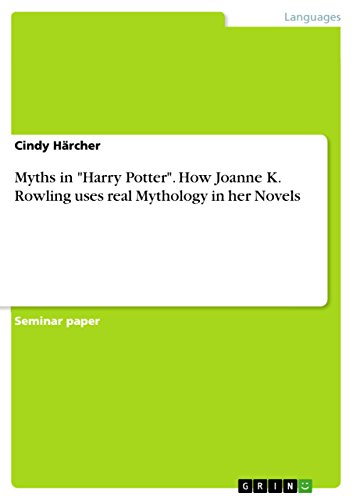 Seminar paper from the year 2014 in the subject English - Literature, Works, grade: 1,7, University of Bayreuth (Fakultät für Sprach- und Literaturwissenschaften), course: Projektseminar, language: English, abstract: With her Harry Potter novels, Joanne K. Rowling created a magical world including an enormous variety of fantastical characters, creatures, objects, and events. But not everyone immediately notices that a lot of those not only arose from her own imagination, but have their origins in history, mythology, and folklore. Hardly any other literary work disposes of such a huge collection of real mythology, history, and folklore, and it is nearly impossible to examine all characters', creatures' and objects' roots. That's why this paper will focus only on one aspect, namely the mythology appearing in the novels. When dealing with this topic, some questions arise, that shall be answered in this paper: Which myths, of which kind and origin appear in the stories? How does Rowling use, embed, and modify them and how does this affect the stories? To answer these questions first it is important to define the term myth. Then some mythic structures appearing in the novels will be examined, followed by a selection of mythic creatures, and mythic characters. Here some chosen creatures and characters out of the novels, as well as their mythical equivalents will be presented and compared to each other. Finally a conclusion will summarize the most important facts and answer the leading questions.