Many, Christopher Right Beyond the Horizon [Idioma Inglés]

Right Beyond the Horizon [Idioma Inglés] 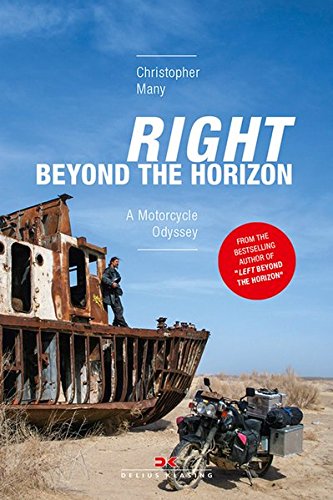 When people say "life's a journey," some take this aphorism more literally than others. Christopher Many embarked on an overland trip in 1997, believing he'd spend no more than a year or two on the road. Well, that didn't quite work out as planned - 19 years have passed, and he's still somewhere out there, doing what he loves most: circumnavigating the globe with vehicles of questionable reliability in a quest to understand, through first-hand experience, what makes humanity "tick". Right Beyond the Horizon tells the gripping tale of Christopher's latest voyage between 2012 and 2016: a motorcycle adventure from Germany to Australia, together with his partner Laura Pattara. Their modern-day odyssey follows the ancient Silk Road from Europe to Central Asia, then across the Pamir Mountains into China, where Christopher and Laura become the first overlanders with a foreign vehicle to obtain legal permission to transit the Middle Kingdom unescorted. Four years later they reach the harbour of Denpasar on the Indonesian island of Bali - the gateway to Australia and terminus of the classic trans-Asia overland route.Come along for an exhilarating ride around the global block with this unusual vagabond and witness all the joys and hardships such a lifestyle entails - every day will be full of surprises and utterly unpredictable! However, you should also be warned: some roads detour into the shadows where the scales of global justice are unbalanced and humanity's failings are all too evident. There's also a major risk that, after the last page, you'll feel inspired to pack your rucksack, free yourself from modern society's constraints and head off into the sunset indefinitely. You wouldn't be the first...

Christopher Many, born in New York City in 1970 to an American father and German mother, has always had a knack of breaking conventional norms and following his own dreams. More than anything else, he wanted to find out what lies "beyond the horizon". After completing an apprenticeship as a boat builder in Bavaria, Christopher lived modestly at various locations, alternatively working and backpacking through the Caribbean, Asia, Europe and Australia. In 1997 Christopher set off on his first motorbike world trip with Puck, his Yamaha Tenere and rode from Germany to New Zealand via India. Three years later he returned to Europe, found a job in Scotland, and began to save up for his next venture: a round-the-world voyage with an ailing Land Rover he bought for only GBP700 (a little over $1,000). He named the Landy Matilda, and between 2002 and 2010 they journeyed together for 3,000 days through 100 countries. His book about this trip, Left Beyond the Horizon: A Land Rover Odyssey, became a bestseller. In 2012, reunited with Puck and with his partner Laura Pattara, Christopher spent four years riding from Europe to Australia. Right Beyond the Horizon: A Motorcycle Odyssey tells the story of his most recent adventure. The future? Well, last we heard he's preparing his fourth trip. Only one thing seems certain: even after 19 years on the road, Christopher has no intentions of settling down with still so much to explore on our wonderfully strange planet...