Verwandte Artikel zu USE of BIOTECHNOLOGY in ORIGANUM SPECIES: In Vitro...

Ozden, Mustafa USE of BIOTECHNOLOGY in ORIGANUM SPECIES: In Vitro Investigations in Oregano

USE of BIOTECHNOLOGY in ORIGANUM SPECIES: In Vitro Investigations in Oregano 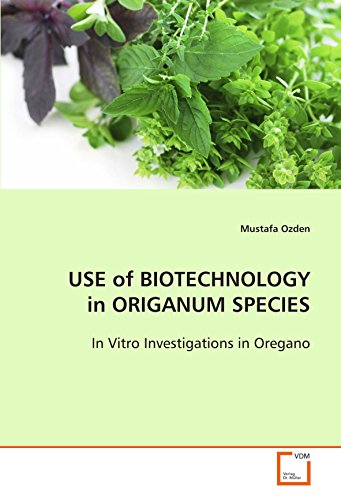 Oregano is one of the most commonly known culinary herbs that are used world wide in cooking. Also oregano is well known as the żpizza herbż and widely used in Mexican and Italian cooking. Some of the Origanum species are also used as a fragrance component in soap, detergents, perfumes, cosmetics, flavorings, and pharmaceuticals. Oregano oil is well known for its ability to slow down food spoilage through its antibacterial, antifungal, antiparasitic, antimicrobial, and antioxidant activity. Carvacrol and thymol are major phenols present in oregano oil with antiseptic properties. The present study was undertaken to standardize media for Origanum species in which plants could be regenerated easily in high numbers by callus culture, and to show its antimicrobial properties. This book, therefore, provides new information about use of oregano oil as a disinfestation agent in tissue culture, callus culture of Origanum species and transient expression of the GUS reporter gene has not been reported yet in Origanum species. This book could be especially useful and shed some light on żimprovement of oregano by using biotechnologyż

Mustafa Ozden was born in Karaman, Turkey. He received his BSc degree in Horticulture from Ankara University. He got MS and PhD degrees in the field of horticulture from Kansas State University. Since 2003, Dr. Ozden has been working as a faculty member at Harran University and conducting research on plant stress physiology and biotechnology.