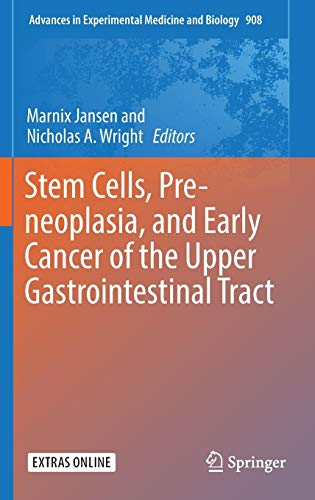 Stem Cells, Pre-neoplasia and Early Cancer of the Upper Gastrointestinal Tract  is an integrative text on both the current state of translational research on every cancer development of the upper gastrointestinal tract as well as on novel clinical diagnostic and therapeutic modalities. It highlights a rapidly growing field within cancer research and is essential reading for oncologists, biochemists and advanced graduate students alike. Springer’s Advances in Experimental Medicine and Biology series presents multidisciplinary and dynamic findings in the broad fields of experimental medicine and biology. The wide variety in topics it presents offers readers multiple perspectives on a variety of disciplines including neuroscience, microbiology, immunology, biochemistry, biomedical engineering and cancer research.

Professor Sir Nicholas Wright’s research is in the field of gastrointestinal stem cells and cancer. He was Professor of Pathology at the Royal Postgraduate Medical School at the Hammersmith Hospital, and then became the Dean of the Royal Postgraduate Medical School before becoming the Deputy Principal of the Imperial College School of Medicine in 1998. Sir Nicholas then served as Warden of Barts and the London, Queen Mary’s School of Medicine and Dentistry from 2001 to 2011. He as served as Group Leader at the Histopathology Unit at Cancer Research UK London Research Institute and was President of the Pathological Society of Great Britain and Ireland and the British Society of Gastroenterology. He was knighted in 2006 for services to medicine. Sir Wright has published over 427 scientific articles and received over 12,939 citations.

Dr. Marnix Jansen is a histopathologist at University College London Hospital (UCLH) and Senior Clinical Fellow at Barts Cancer Institute. He a rising young star in the area of upper GI cancer research and he has published 23 scientific papers and has received over 794 citations.