This is Redstone Missile Weapon System 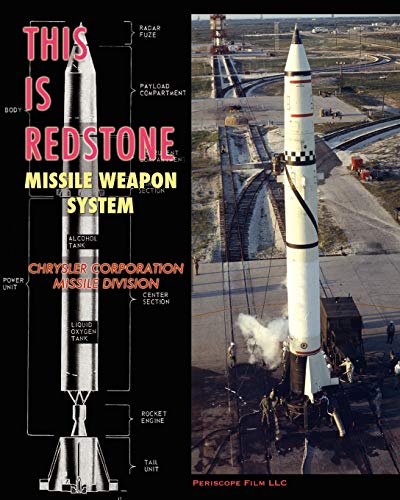 Named in honor of the Redstone Arsenal in Huntsville Alabama where it was developed, the SSM-A-14 Redstone was the first large ballistic missile in the U.S. inventory. Designed by the Army Ballistic Missile Agency under the leadership of the brilliant Wernher von Braun, Redstone was a direct descendant of the A-4 / V-2 rocket produced in Nazi Germany. Design work on the missile was finished in 1952. It incorporated many innovations including inertial guidance and a separable warhead section that, by decreasing drag, increased the weapon's range. Steerable rudders and refractory carbon vanes mounted in the rocket engine's exhaust, ensured course control. Redstone first flew on August 20, 1953 although the result was inauspicious - it traveled a mere 4.5 miles. Test flights continued over the next five years, and many refinements were made to ensure reliability. The final production version had a range of just over 200 nautical miles, or 175 carrying a W-39 nuclear warhead. In August of 1958, a Redstone became the first American missile to participate in a nuclear test, detonating a 3.8 megaton warhead as part of Operation Hardtack. In the field however, the Redstone missile proved cumbersome to move into position and time consuming to activate. The process could require twenty support vehicles and eight hours of work. A minimum of fifteen minutes' fueling time - an eternity in a combat situation - was needed after receiving a launch order. The solid fueled Pershing missile, which replaced the Redstone in late 1964, overcame these shortcomings. While Redstone's role as a weapon system was brief, it had a major impact on America's early space program. In January of 1958, just four months before the U.S. Army activated the Redstone in Germany, a modified version designated Jupiter-C put Explorer, America's first satellite, into orbit. In 1961, the Mercury-Redstone Launch Vehicle lifted Alan Shepard into space. Originally created in 1959 by prime contractor Chrysler Corporation, which built 101 of the 128 missiles produced, This is Redstone provides a detailed overview of this historic weapons system. It includes chapters about the missile's structure, operation, propulsion and propellant systems, ground support equipment, guidance and controls, firing site operations, and more.