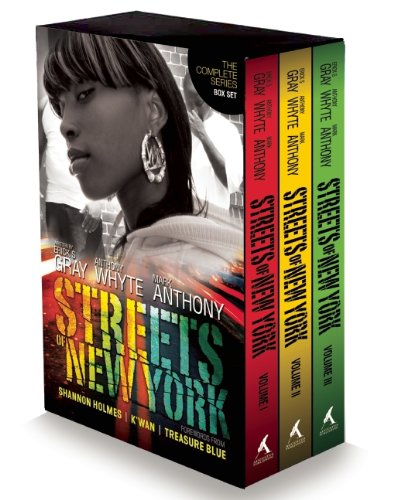 (Volume 1) Streets Of New York Volume 1 takes readers into the turbulent lives of Promise, Squeeze, Show, and Pooh, four young men from the rough-and-tumble streets of Brook-nam. Big, brash, and bold, the four are modern-day gangstas who take the law into their own hands, helping to rid the 'hood of derelicts by jacking drug dealers, pimps, and prostitutes. Getting rid of the trash has honed their skills in the urban sports of robbery, jooksing, and jacking, and the gang is good at what they do. But is cleaning up the neighborhood what it's really all about, or have they begun to enjoy the thrill of the hunt just a little too much? When is enough, enough? A true coming-of-age urbanthology, these funny and exciting stories land the reader deep in Gotham's gritty underbelly. (Volume 2) The first installment in this exciting series followed Promise, Squeeze, and Show as they robbed, whored, and fought their way to adulthood on the mean streets of Brooklyn. Now, it's a year later. Promise is trying to get out of the gangsta life, but the streets have a powerful call. Squeeze and Show are making out like bandits with their hot new nightclub, the Brooklyn Cafe. Grindin' in the streets is no longer an option, but trouble still follows the pair like heat on a sunny day. Staying cool with the cops and the city requires flexing a lot of street muscle, and they've got too much invested to not use every weapon in their arsenal. Envious of their success, Promise returns to claim what he believes he's owed, causing a rift within the gang -- a rift so wide that it sets off a war, leaving the participants reeling with deadly losses. (Volume 3) In the trilogy's previous entry, jealousy ignited long-simmering tensions between Promise, Squeeze, and Show, leading to an all-out gang war. Streets Of New York Volume 3 finds the neighborhood reeling from the pain of losing a son and brother to gang violence, yet still, the mayhem continues. The lives of best friends hang in the balance. Regrets abound, but suspicions linger. Bonds are tested and covers blown. Those not from the streets must watch their backs or risk the wrath of street justice. As the novel races to a dramatic close, the fate of an entire family is up in the air. Coauthored by hip-hop lit heavyweights Erick Gray, Mark Anthony, and Anthony Whyte, and with a powerful foreword by Treasure Blue, the Uncle of Urban Lit, Streets of New York Volume 3 is a satisfying finale to an action-packed, unforgettable saga.

Shannon Holmes: Mr. Holmes is the most anticipated author in the industry; his freshman novel B-More Careful was an immediate cult classic, selling over 100,000 copies in its first six months of publication and continues to sell today as though it was just released. Shannon's second novel, Badgirlz, was published under the Atria imprint of Simon and Schuster, making him one of the first Street Lit authors to land a deal with a major publisher. On the back end of it all, Shannon has also dealt with two of the most successful and influential women in the Urban Fiction market. He was the first author to be published by Teri Woods--igniting the fire for B-More Careful in 2001--and he aided Vickie Stringer in the launch of Triple Crown Publications. Erick S Gray- Some of the greatest things invented happened so by accident and so was Erick Gray's writing career. An avid reader and closet writer for years, Gray got his start in this genre when he handed his first manuscript to Carl Weber, a book store owner at the time. Carl passed his work on and soon after Erick became a published author. That was a decade ago and Erick Gray continues to hold his place as a writer to be contended with in the urban fiction genre. With the release of his first novel, Booty Call, Erick showed what a well-crafted story, developed characters and good editing was all about. Since then Erick has released six other novels including a sequel to his critically acclaimed Booty Call. Mark Anthony: During the late 90's--at a time when there were only two (2) other publicly known gritty urban tales available on the market--when the traditional and major publishers were ignoring this budding genre of Street Fiction, Trendsettaz Entertainment was formed and Mark hit the streets with his self-published book entitled, Urban Massacre, which would later be changed to Paper Chasers. Though the production of these books was not quality and they were falling apart, he managed to successfully sell it to the public. Having survived the growing pains of the publishing industry, he would go on to build QBoro Books, which now manages over 30 authors and is one of the top publishers of urban fiction today. Later he would merge with Urban Books--who has major distribution through Kensington, a deal that separates him from all other urban book publishing companies--as well as ink deals with G-Unit Books. And to add to his long resume of success in this industry he is looking to produce films in the near future. Anthony Whyte: Anthony Whyte is an Essence best selling author and founder of Augustus Publishing and Street Literature Review Magazine the voice of Hip Hop literature. Mr. Whyte is a highly respected and renowned author in the Hip Hop fiction genre. His list of published works includes: Ghetto Girls, Ghetto Girls Too, Ghetto Girls 3: Soo Hood, the Streets of New York series and Blackout based on the BET and Paramount Pictures film. Mr. Whyte's titles combined have sold more than 175,000 copies nationwide. He currently is working on his next novel, Street Chic. He's a former military officer and spent over ten years in the US army. He was a social worker for the Department of Social Services for New York City's Child Protective services. Whyte graduated from Lehman College in the Bronx and is an outstanding member of the Tuesday Night Writers' Workshop, conducted by Susan Shapiro and NYU School of Continuing Education.