Scripted GUI Testing With Ruby (The Facets of Ruby Series) 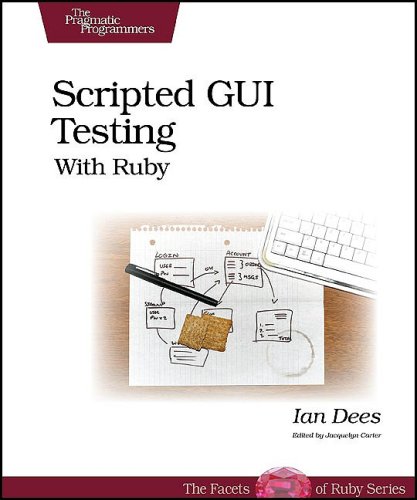 Scripted GUI Testing with Ruby is a practical, quick-moving tutorial based on real life, and real-world GUI applications.

Right out of the gate you'll start working with code to drive a desktop GUI. You'll discover the kinds of gotchas and edge cases that don't exist in simple, toy programs. As you add more tests, you'll learn how to organize your test code and write lucid examples. The result is a series of "smoke tests" team will run on Continuous Integration servers.

Next, we'll explore a variety of different testing tips and tricks. You'll employ a series of increasingly random and punishing test monkeys to try to crash programs. Table-driven techniques will show you how to check dozens of different input combinations. See how to use longer acceptance tests (in the form of stories) to represent the way a typical customer would use your program.

The book uses examples from Windows, OS X, and cross-platform Java desktop programs as well as Web applications. You'll develop test scripts in Ruby; you don't need to be a Ruby expert, but basic comfort with the language will be helpful.

Ian Dees was first bitten by the programming bug in 1986 on a Timex Sinclair 1000, and has been having a blast in his software apprenticeship ever since. Since escaping Rice University in 1996 with engineering and German degrees, he has debugged assembler with an oscilloscope, written web applications nestled comfortably in high-level frameworks, and seen everything in between. He currently hacks C++ application code, automates laboratory hardware, and yes, writes user interface test scripts for a test equipment manufacturer near Portland, Oregon. When he's not coding for work or for friends, you're most likely to find Ian chasing his family around on bicycles, plinking away at his guitar, or puzzling at the knobs on the espresso machine while some impromptu meal simmers on the stove nearby.

1. Scripted GUI Testing With Ruby (The Facets of Ruby Series)