Verwandte Artikel zu Fallen Glory: The Lives and Deaths of the World's...

Fallen Glory: The Lives and Deaths of the World's Greatest Lost Buildings 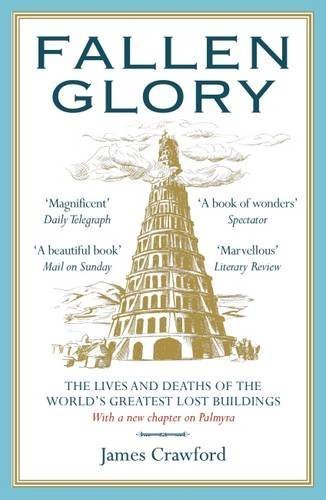 'The most interesting book I have come across this year ... magnificent'
Alexander McCall Smith, NEW STATESMAN

'Delightful ... The chapter on the Twin Towers is one of the best such pieces I have read'
SCOTLAND ON SUNDAY

'Crawford is a striking storyteller ... resoundingly fine writing'
THE TIMES

'Magnificent ... Many of these buildings can be seen as microcosms of the decline and fall of whole civilisations'
DAILY TELEGRAPH(***** 5-star review)

'Crawford has a striking ability to summon the reality of these long-vanished places ... he writes exquisitely, combining economy and clarity with beautiful flights of phrase ... Fallen Glory is a marvellous book.'
LITERARY REVIEW

'A cabinet of curiosities, a book of wonders with unexpected excursions and jubilant and haunting marginalia . . . Ideas spin off ideas and facts off facts like a marvellous clattering snooker-table'
THE SPECTATOR

'Read a chapter a night and set up camp in Genghis Khan's tented cities and pace the Forum of Ancient Rome at leisure. This is a beautiful book, and an admirable monument to the most spectacular buildings man's ingenuity and ambition have ever raised'
MAIL ON SUNDAY

'Subtle, ambitious, well-researched . . . It is the people who built, lived in, destroyed, rediscovered, excavated and rebuilt the buildings he has chosen which stimulate . . . Crawford manages the difficult feat of engaging each of his chosen buildings with an equal degree of passion and engagement'
HISTORY TODAY

'A terrific piece of historical detective work, full of twists and surprises. Each building represents a fascinating moment in history, and the people and events that created and destroyed them are brought thrillingly to life.'
JOHN GRINDROD, author of CONCRETOPIA

'An enthralling piece of detective work'
THE BOOKSELLER (picked as a 'Non-Fiction Autumn Highlight') --...

SHORTLISTED FOR THE SALTIRE NON-FICTION BOOK OF THE YEAR
A SCOTSMAN BOOK OF THE YEAR, 2016
Buildings are more like us than we realise. They can be born into wealth or poverty, enjoying every privilege or struggling to make ends meet. They have parents -- gods, kings and emperors, governments, visionaries and madmen -- as well as friends and enemies. They have duties and responsibilities. They can endure crises of faith and purpose. They can succeed or fail. They can live. And, sooner or later, they die.
In Fallen Glory, James Crawford uncovers the biographies of some of the world's most fascinating lost and ruined buildings, from the dawn of civilisation to the cyber era. The lives of these iconic structures are packed with drama and intrigue. Soap operas on the grandest scale, they feature war and religion, politics and art, love and betrayal, catastrophe and hope. Frequently their afterlives have been no less dramatic -- their memories used and abused down the millennia for purposes both sacred and profane. They provide the stage for a startling array of characters, including Gilgamesh, the Cretan Minotaur, Agamemnon, Nefertiti, Genghis Khan, Henry VIII, Catherine the Great, Adolf Hitler, and even Bruce Springsteen.
Ranging from the deserts of Iraq, the banks of the Nile and the cloud forests of Peru, to the great cities of Jerusalem, Istanbul, Paris, Rome, London and New York, Fallen Glory is a unique guide to a world of vanished architecture. And, by picking through the fragments of our past, it asks what history's scattered ruins can tell us about our own future.

This paperback edition includes a new chapter about Palmyra.