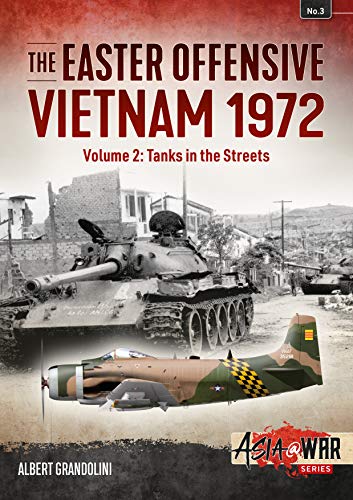 Stunning in its magnitude. * Argunners Magazine *

On 30 March 1972, while peace negotiations had been dragging on for four years in Paris, the North Vietnamese launched a wide scale offensive in order to break the stalemate. At that date, practically no American ground forces remained in South Vietnam where a limited offensive was expected in the Central Highlands area. But nobody imagined the magnitude of the multi-divisional, armour led onslaught. The blow fell first across the Demilitarized Zone (DMZ) separating the North from South Vietnam (see Volume 1). Following from the initial attack, in a surprise move, three communist divisions with T-54 tanks attacked from their sanctuaries in Cambodia just north of Saigon. Their tanks ventured into the streets of An Loc City where they were checked by a desperate and heroic stand by the South Vietnamese soldiers and their American advisers, thus saving the capital of South Vietnam. Finally, the third prong of the North Vietnamese offensive swept across the northern Central Highlands, destroying a whole South Vietnamese division. The communists then resumed their advance, but their tanks were again entangled in street fighting, this time inside Kontum City. Furthermore, they were harassed by newly developed helicopter gunships armed with anti-tank missiles. This volume not only details the combat taking place in these two areas but also the organization of both the Army of the Republic of Vietnam (ARVN) in the South and the People's Army of Vietnam (PAVN) in the North. It particularly emphasises the transformation of the former from a mainly infantry force into a modern motorized force. It also describes how the North Vietnamese learnt the hard way about the use of their tanks. The author relies on not only American archives but also on Vietnamese sources, from both sides. The book contains 130 photos, five maps and 18 colour profiles. Asia@War - following on from our highly-successful Africa@War series, Asia@War replicates the same format - concise, incisive text, rare images and high quality colour artwork providing fresh accounts of both well-known and more esoteric aspects of conflict in this part of the world since 1945.