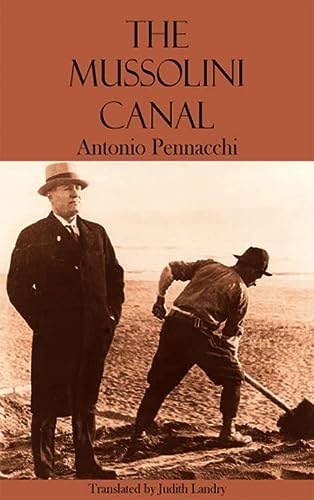 'It is a truly fine novel, demonstrating a remarkable talent, Antonio Pennacchi's high ambition matched word for word by his artistry.' --Rosemary Goring's Books of the Year in The Sunday Herald

'Pennacchi's book has the merit of shifting the dominant perspective of historical discourse, by presenting the great events in history from the point of view of their impact on the private, individual dimension. In this regard, The Mussolini Canal can be seen as a contribution to the field of micro-history , since it highlights the importance of oral tradition, and effectively shows how social and cultural history can illuminate wider historical events. At the same time, like all great works of fiction, Pennacchi s story constructs a parallel universe where the reader develops a true relationship with the characters. After laughing with them (and at them), suffering with them, and becoming invested in their struggles, we cannot help missing the Perruzzi when it is time to separate.' --Caterina Sinibaldi in The Warwick Review

'The Mussolini Canal by Antonio Pennacchi is an epic account of the rise of Fascism. It s the story of the (fictitious) Peruzzi clan of sharecroppers, moved from their native north to the malaria-ridden Pontine Marshes for the building of the canal and the New Town of Littoria. It mingles family legend and up-to-date political commentary with personal appearances from Edmondo Rossoni and Mussolini, and takes us through Italy s Imperium and the campaign in Ethiopia to the Anzio landings. The complex chronology and the demotic and combative narrative voice (of a young Peruzzi descendant) are imaginatively handled by the translator, Judith Landry, and the novel presents us with a whole new landscape, complete with the kiwi fruits and eucalyptus that thrived in the reclaimed land. Better than any guidebook, it explains how and at what cost Mussolini succeeded where Romans, popes and emperors failed. A challenging but very illuminating read.' --Margaret Drabble in Books of the Year in The Times Literary Supplement

'Winner of Italy's prestigious Strega Prize in 2010, this is Antonio Pennacchi's second nove,. As the labyrinthine story unfolds, the reader scarcely needs Pennacchi's prefatory note that: 'For what it's worth, this is the book I came into the world to write.' In every line The Mussolini Canal feels personal, as if its plot and cast emerge not from the writer's imagination but from his marrow. A hefty work, of more than 500 pages, it is so beguiling one does not want it to end. Rambunctious and picaresque, it is the story of a generation of poverty-stricken peasants from the Veneto and Tuscany, who were enticed south in the 1930s by the promise of land in the dreaded Pontine marshes, near Rome. Until that time, nobody sane would have gone there, the place a mosquito-infested swamp. But under Mussolini's fledgling rule, the marshes were properly drained for the first time in history, allowing land to be reclaimed, and many lives with it. Brilliantly controlling his material, retracing his steps, repeating stories from fresh angles, or simply reminding the reader of what they already know, Pennacchi's style holds an echo of early Gunter Grass, but is infused with a spirit and tone that are entirely original. High among its charms is his rich vein of humour, a mordant leavening to otherwise grim material, as the Peruzzi family picks its way through the debris of half a century of troubles. Gathering pace slowly, as one grows familiar with its dizzying cast and the tale's back and forth telling, it builds in tension like a spring being tightly coiled, creating a vigorous, unrepentant, anarchic picture of a clan surviving despite chaos all around.' Rosemary Goring in the Sunday Herald

Buchbeschreibung Dedalus Ltd Mrz 2013, 2013. Taschenbuch. Zustand: Neu. Neuware - Spanning 100 years of Italian history, seen through the lives of a peasant family, this truly unique book from Italy suffuses contemporary events throughout the book and the hardship and misery of earlier periods are also seen against the backdrop of modern prosperity, resulting in an utterly compelling and memorable read. More than 400,000 copies have already been sold in Italy. 536 pp. Englisch. Artikel-Nr. 9781909232242